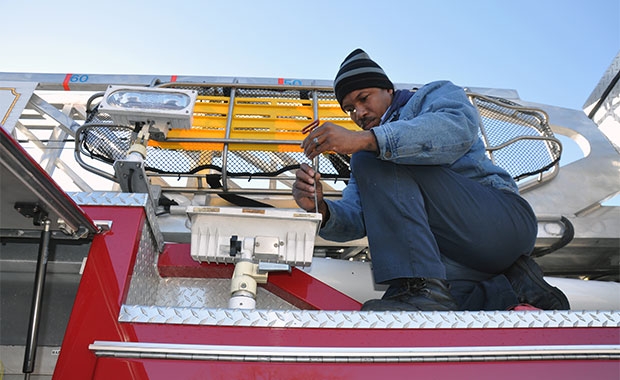 Andrew Dixon, assistant shop manager in the Fleet Management Department, investigates a broken light on the side of a fire vehicle. Photo by Paul Beckman

Firefighters are ready to battle blazes at a moment's notice. And so are their vehicles, thanks to Andrew Dixon's mechanical know-how.

On the surface, Andrew Dixon is the picture of calmness. His attitude is all business. His approach to work is methodical. His attention to detail is thorough.

But don’t confuse any of that with boring.

Dixon, assistant shop manager in the Fleet Management Department, said he's aware that any mistake he makes could cost lives.

The city has 192 heavy duty fire vehicles in more than 100 fire stations sprinkled across Houston’s sprawl. And Dixon is just one of a handful of hotshot mechanics who fixes them and keeps them speeding to fires and other emergencies.

His world is populated by cylinders, valves, light bulbs and hydraulic systems. Even so, Dixon said it’s really about people.

“You fix the equipment so that the emergency responders can get to the destination to save a life,” Dixon said. “So you're dealing with two lives — the responder’s life and the life they're going to save. You have to have the right mindset when doing this job.”

Just after 6 a.m. on a chilly January morning, fleet management’s repair shop on Dart Street was buzzing. Walking from one end to the other is like flipping through the pages of a mechanical anatomy book. Surrounded by metal guts stacked on shelves and tables, fire trucks of all kinds faced dissection on jacks or standing with their cabs cracked forward.

Dixon was checking the supplies in his truck before heading to Fire Station 16 on Richmond Avenue.

“We’re going to assess a vehicle and see if it’s something we can fix in the field, or if we need to bring it back to the shop,” Dixon explained.

Dixon has a long history of fixing things. During stints in the military and reserves, he repaired aircraft and helicopters. Since then, he’s worked on Metro busses and cars. Now, with six years in the city under his belt, he knows his way around fire engines.

Arriving at Fire Station 16, Dixon signs the station's log book and finds fellow troubleshooter Cesar Zendejas already in a fire truck cab with the engine running and laptop open to diagnose the problem.

The issue could be electrical or mechanical, Dixon said. But any problem that drains power from the engine means they need to take it out of service to fix it.

“When you engage the pump, you have to have full engine power because that moves a lot of water and it loads that engine down,” Dixon said.

As Dixon was talking, sirens blasted and firefighters appeared just long enough to clamber into another fire truck and speed off.

“It took them about two minutes to get from upstairs, throw on their gear and they were gone,” Dixon said. “And that’s what we're trying to do — keep the trucks (functional) so they can do that. That could make the difference in saving someone’s life.”

Dixon spent a good part of his day zigzagging across Houston from one fire station to another. At Fire Station 76 on the west side, he said broken light fixtures on one side of a ladder truck needed rebuilding. On the other side of town at Fire Station 71 in Clear Lake, he investigated a possible water tank leak.

“We only have a spoonful of mechanics,” Dixon said. “I think we do a pretty fair job, just as long as all the vehicles don’t break down at the same time.”

Keeping fire trucks going on a day-to-day basis keeps Dixon busy. But when there is a major fire, he and his team drop everything to go. They keep an eye on the trucks to make sure nothing hinders the operation.

“You never know, you may get to a scene and have an issue with a truck,” Dixon said. “A lot of time, it’s something simple and we can fix it at the scene. Or we can say, ‘Hey, this truck has to come out.’ ”

When fighting major fires, the trucks are constantly running and fuel use becomes a problem.

“If they’re on the scene, they suck down diesel. If it’s a long scene, they’ll start calling for fuel support. So we’ll get the fuel truck and supply them on site.”

But even on calm days when everything is back to routine, Dixon said his job still keeps him interested because the technology in the vehicles keeps changing.

“It's changing and it's evolving,” Dixon said. “It's going to get a lot more technical. New diesels are different from the older diesels.”

One thing that doesn’t seem in danger of changing is Dixon’s drive to fix everything correctly. And that’s good news for firefighters and Houston residents.