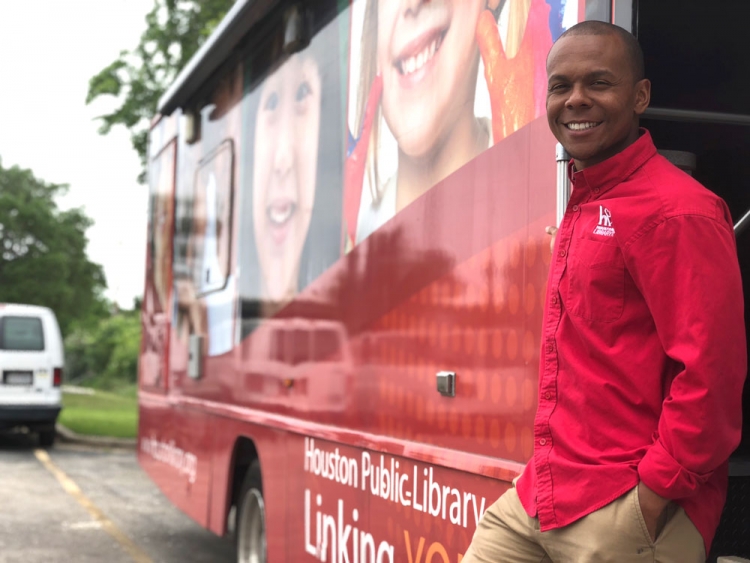 Learn how this city employee is bringing the treasures of the library to the doorsteps of communities. Photo by Lucha Morales

Vibrant red and decorated with gleaming faces of people, the library on wheels makes a statement as it pulls up to the main entrance of Minute Maid Park. Loaded with shelves of books, a 3D printer and LEGO robotics kits, the mini mobile unit is gearing up to greet fans attending the Astros Opening Day Street Fest.

“The street fest is actually part of a partnership that the Houston Astros Foundation, HPL, and HPL Foundation established,” said Brandon Denton, a senior community liaison for the Houston Public Library’s community engagement team. “This is one of the events we can come to in order to reach out to more people in the Houston community.”

During the street fest, Denton and his team are hoping to get at least 100 library card sign ups and spread the word about library services and programs. After a few library sign ups, Denton welcomes a young boy and his brother onto the mini mobile bus.

He shows them a 3D print of an Astros logo underway as he hands them a blue and green LEGO robot that’s controlled by an app on an iPad. It’s a familiar scene that plays out time and again for Denton during outreach events, who is smiling and talking with the boys’ father.

“One of the most popular programs we do for the youngsters is LEGOs,” Denton said. “I used to think LEGOs were just putting a bunch of blocks together, but there’s LEGO robotics education components that are pretty fascinating.”

Two mini mobile units and one mobile express unit equipped with 12 desktop computers, 10 laptops, wi-fi and a large-screen smart board make up HPL’s fleet of traveling libraries that brings programs directly to residents three to five times a week.

“We want to let the Houston community know about HPL, the community engagement team and what we have to offer,” Denton said. “We do pop-up libraries, we do English as second language classes, we provide computer and internet basics classes, gaming and coding, programming, tutoring, LEGO robotics and 3D printing.”

As a senior community liaison, Denton reviews mobile unit requests from the community, coordinates and leads events, oversees grant administration and helps with community partnership development. Denton, who transferred from the city’s Parks and Recreation Department to HPL two years ago, is no stranger to community relations.

Before embarking on his public service career, he worked as a community relations assistant for the Memphis Redbirds, a minor league baseball team of the Pacific Coast League. In 2012, he was hired on with the Houston Astros.

“My first position was instructional coordinator for the Urban Youth Academy, where I taught kids baseball, softball and life skills,” Denton said of his time with 2017 World Series Champions. “Then I was promoted to community relations manager.”

But after four years, the glitz and glam of the sports world lost its appeal and Denton sought out a career in public service.

“I think it’s purpose driven and purpose fulfilling for me to just engage with people and get to know different people,” Denton said of his time with the city. “I get to meet people from different backgrounds, different cultures, races, and religions and learn how they live their lives and make themselves a part of the Houston community.”

“A lot of people don’t know we have this unit,” Denton said of people’s reactions to the buses.

“We can now get ebooks from the library,” Mendoza said. “The process was very easy.”

Nearing the end of street fest, Denton invites fans to spin a wheel for HPL giveaways and tells them about Camp Stream, HPL’s summer program for kids and teens of all ages that focuses on science, technology, reading, engineering, arts and math activities for campers.

In the weeks to come, Denton and his team members will be taking out both the mobile express unit and the mini mobile units for senior computer classes, ESL classes, LEGO education at various libraries and any other community requests for services.

Denton is often asked why he traded his career in sports for a career in public service.

“I think that no matter what, you should stay true to your values and follow your passion,” he said. “If you see that there is something you want to do. Whether it’s making a difference in the community or providing a service for somebody, do that and follow that.”

“That’s what drove my whole entire career path,” he said. “Being able to engage with people, get to know people and provide something for them that they need in a hands-on way.” 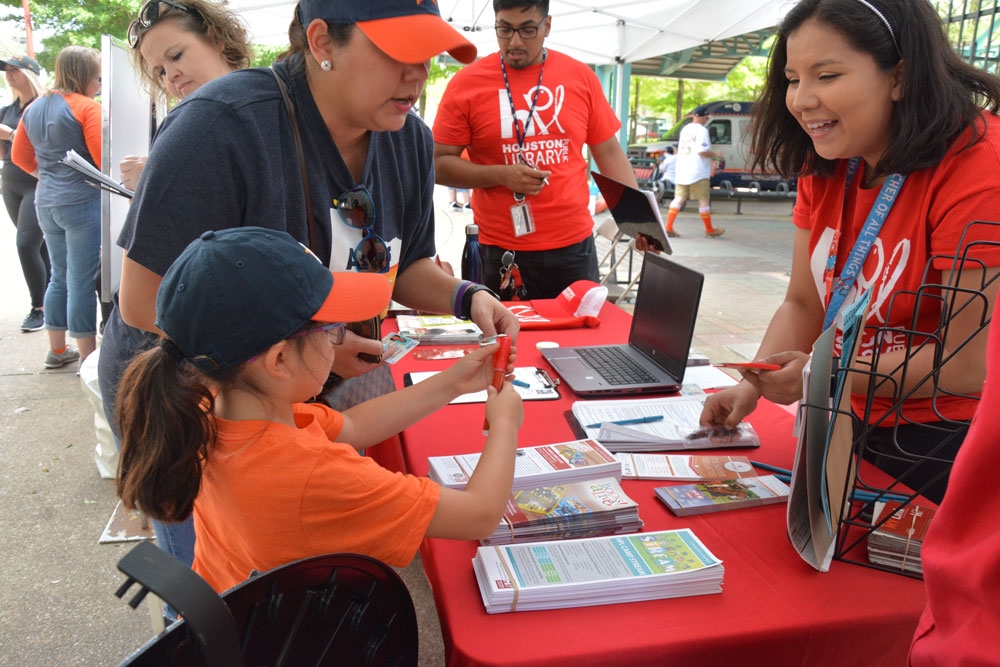 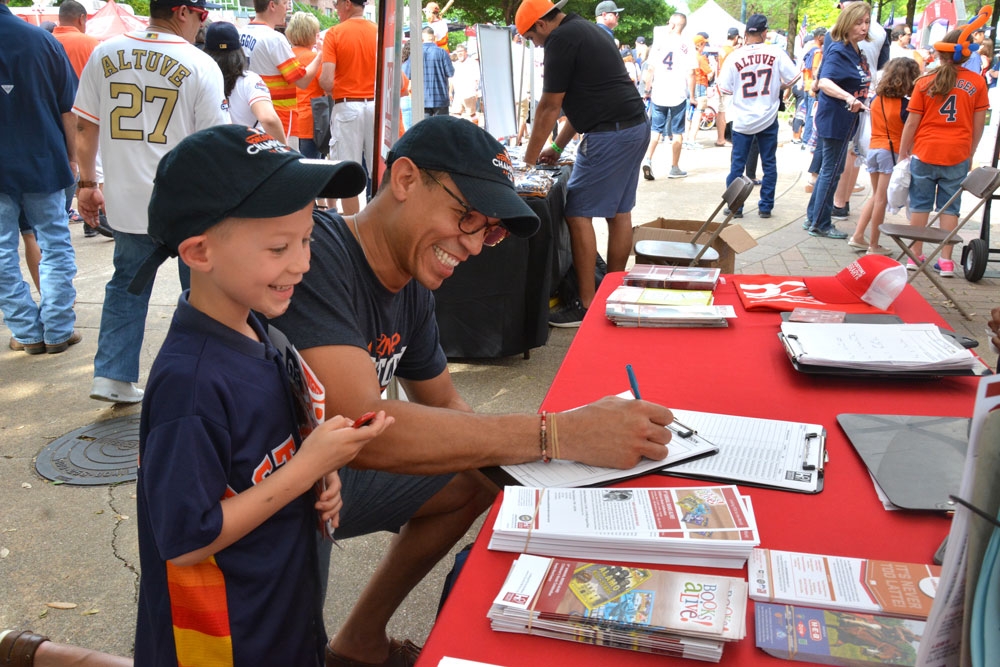 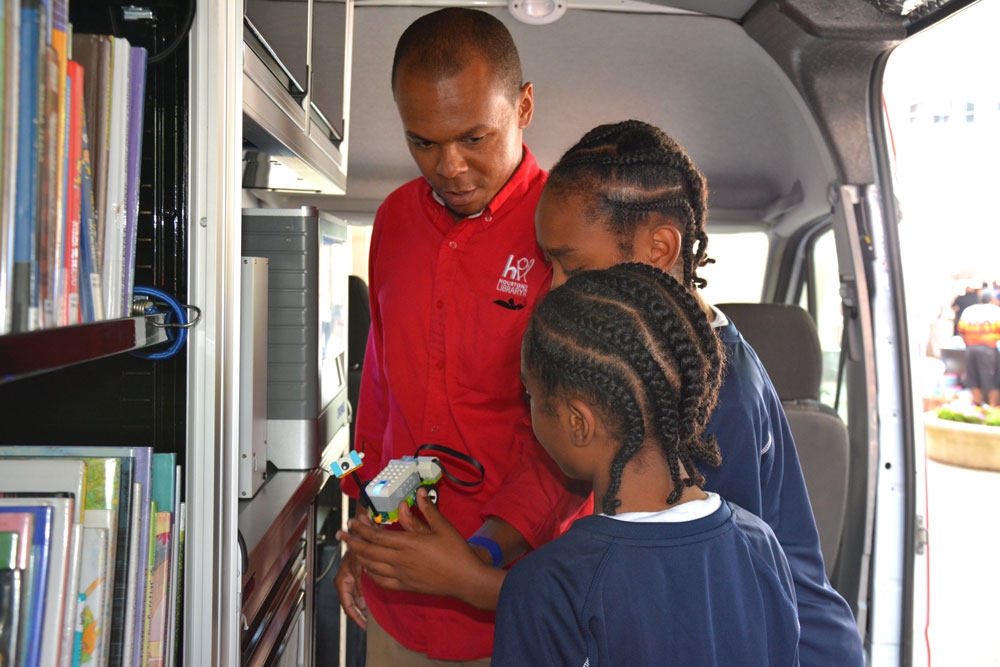 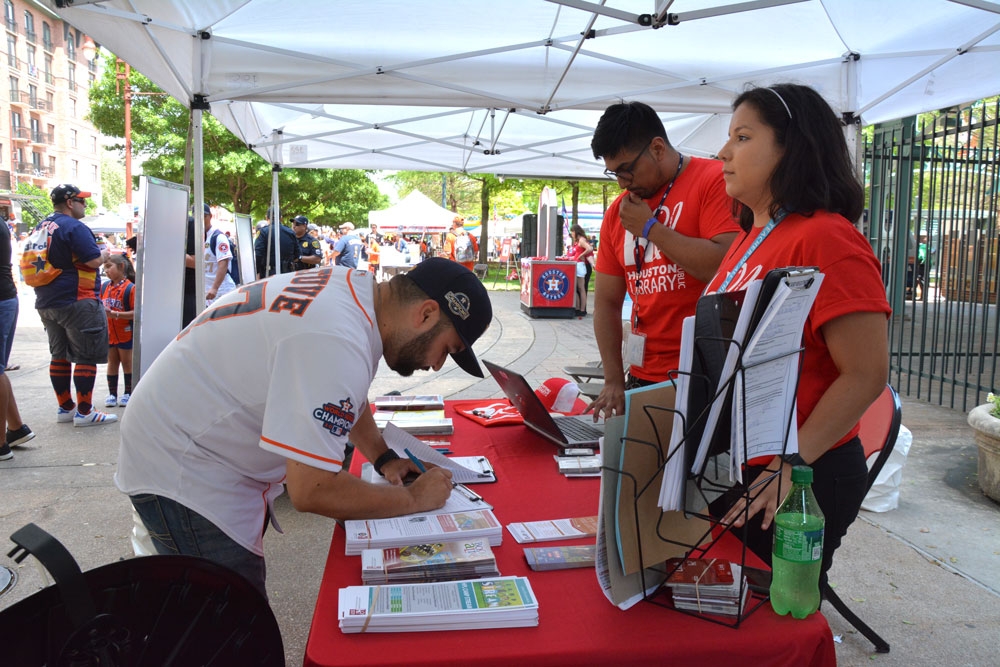 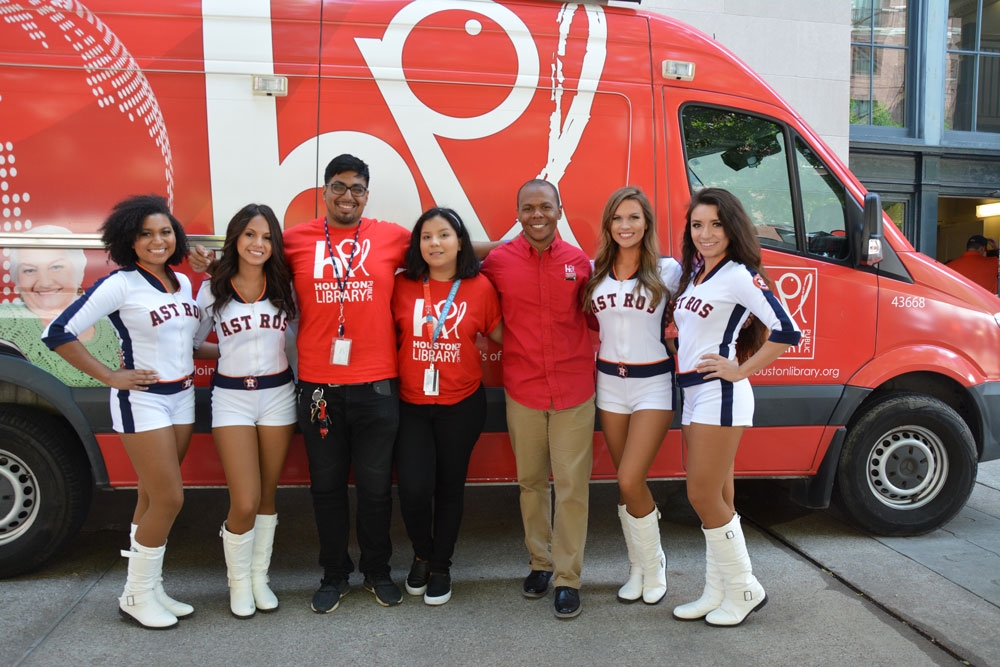 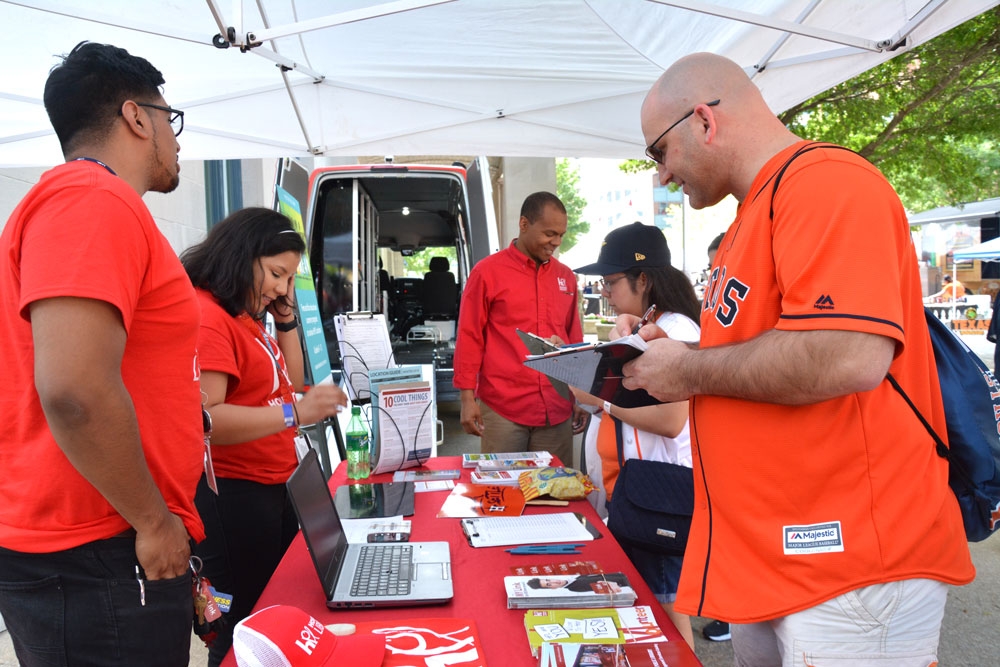 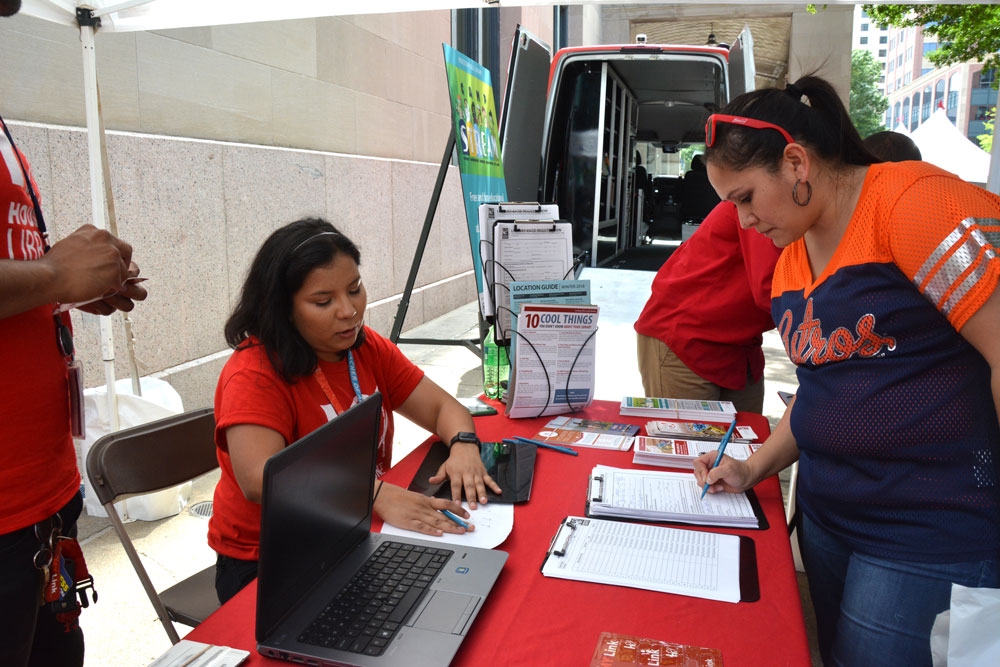 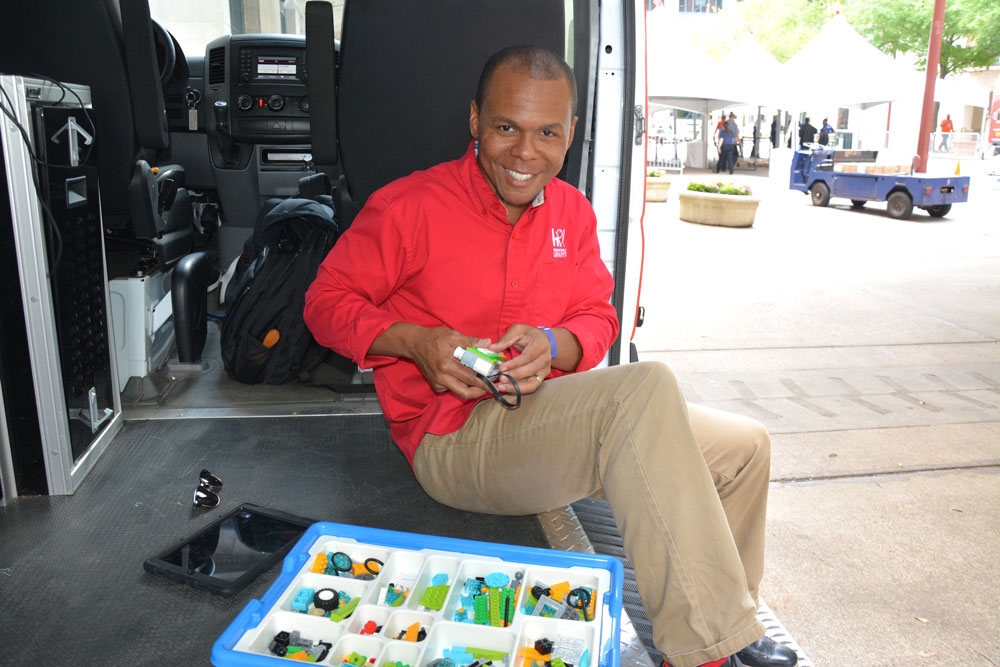 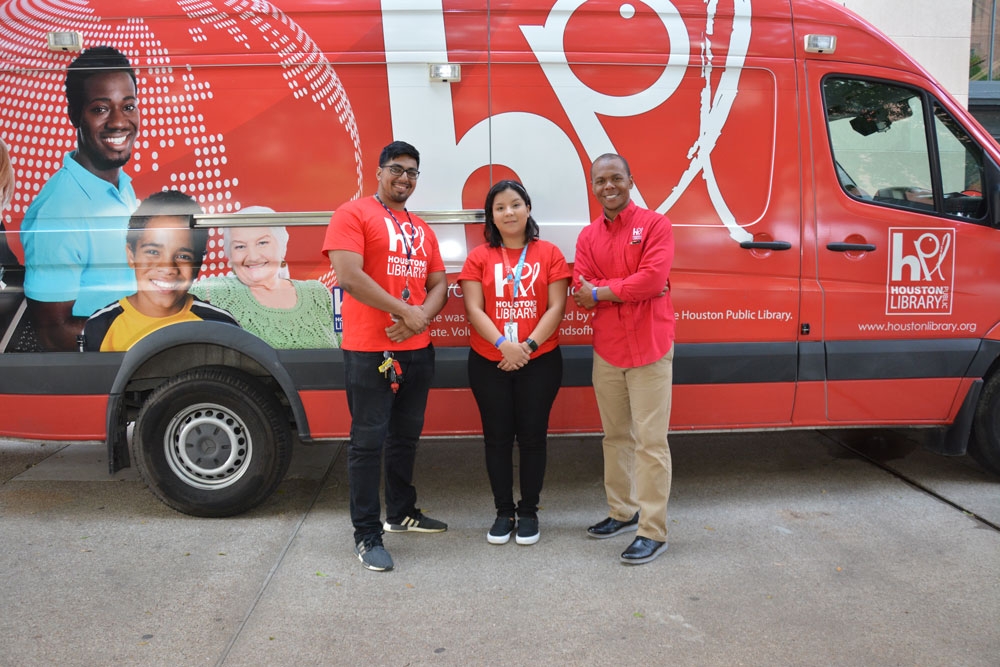 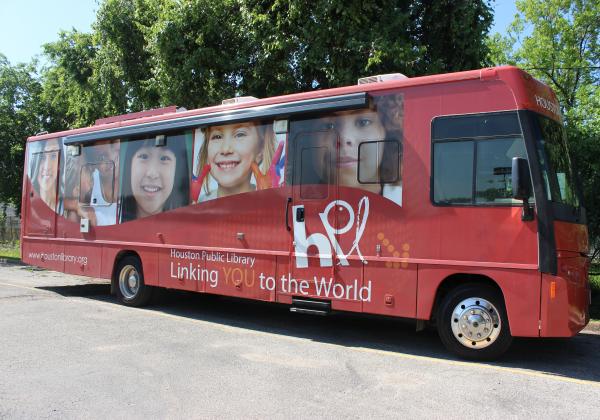