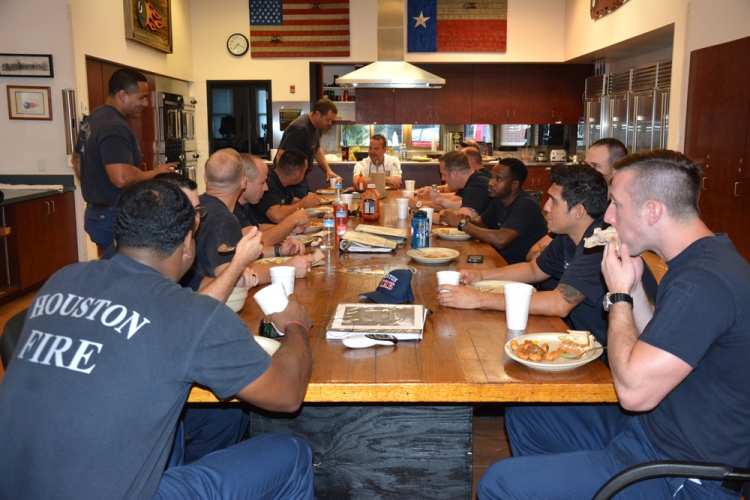 Houston Fire Department Station 8 firefighters gather for breakfast to fuel up for a 24-hour shift. Photo by Elise Marrion

Firefighters spring to action as alarm bells ring around the clock at Houston’s biggest and busiest station. But one sound puts firefighters at ease — the dinner bell.

After 13 years with the Houston Fire Department, Capt. David Paige is known for extinguishing fires. But at meal time, he’s known for firing up the grill and turning up the heat in the kitchen. When Paige commands the downtown Station 8 firehouse kitchen, his colleagues never have to worry about getting a rib-sticking, satisfying meal.

City Savvy spent a day on the job with Paige to see what it takes to feed a firehouse. Station 8, dubbed “Downtown Heat,” is the busiest in the city for total runs or dispatch responses. The station is the home away from home for 17 men on B shift, there are women on other shifts, but it’s all guys at Paige’s firehouse dinner table.

HFD firefighters work a two-day “tour” — 24 hours on, 24 hours off, 24 hours on — followed by five days off. Meal time is critical for firefighters to prepare for the day and to fuel the long shifts and life-threatening work.

“A good firehouse chef is someone who likes to do it, and someone who has a good variety of recipes,” said District Chief Clyde Gordon. “The cook is one of the most important people on the team. This job is hard enough. If it’s a super busy bad day and everybody is exhausted and grouchy, a good meal will make you feel better. It re-energizes the team to keep going a little longer.”

With 17 men to feed, Paige uses every tool at his disposal. As far as kitchen inventory, this station is stacked: four ovens, a six-burner stove, multiple portable cooktops, eight refrigerators, a full smoker, fryer, and a custom-made 54-inch grill. The grill alone can fit 20 steaks, 20 ears of corn and three sides of salmon at one time.

Paige arrives at the station by 5:30 a.m. to check his gear and equipment before starting on breakfast, which is served at about 7 a.m. Coffee is an obvious favorite among firefighters working long shifts, but Paige starts the day with one non-negotiable ritual: fresh salsa made every morning. Firefighters spice up their meals and snack on the salsa throughout the day. See the sidebar for the Downtown Heat salsa recipe.

Breakfast sandwiches and tater tots were on the menu that Sunday morning. Feeding the crowd took four dozen eggs, three pounds of bacon, two trays of frozen tots, hamburger buns, cheese and toppings. Paige said he also offers a large bowl of fruit for extra fiber. Breakfast is usually uncomplicated and the guys know the drill, so Paige has several sous chefs on hand helping fry bacon and eggs.

Paige learned to cook at home with his mother and grandmother, he said. His fellow firefighters benefit from family recipes, but Paige also takes inspiration from cooking shows and recipes he finds on the social media site Pinterest. He likes to test recipes at home with his wife and two daughters.

“If my picky 5-year-old and 2-year-old will eat it, the guys will eat it,” Paige said. “I have some Eastern European heritage, so I have a pretty good recipe for potato pancakes. My mom and grandma put me to work in the kitchen, and I came to the realization that if I didn’t like what was for dinner, I would still have to eat it. But if I cooked it, I had a say in what was on the table.”

Paige said the Station 8 firefighters are usually easy to please and don’t complain much. One team member is allergic to shellfish, so Paige said he accommodates dietary restrictions by cooking a chicken breast in a separate pan.

“And if anyone has an allergic reaction, we ARE the paramedics and we have epi pens,” joked Capt. Brandon Everette.

Planning meals, budgeting and grocery shopping are part of day-to-day station management. The firefighters share the shopping and split the bill. Everyone pitches in $10 a day, which covers three meals a day. During a typical tour, Paige plans two breakfasts, two lunches and two dinners, including desert.

Paige leads the four-person crew assigned to one of the station’s two fire engines. If you’ve ever seen a fire truck outside a grocery store or heard dispatch alert tones blaring from across the aisles, you know that firefighters shop as a team. You might spot the Station 8 crew shopping at the Montrose area H-E-B at the intersection of  Dunlavy and Alabama streets. The uniform comes with some privileges, Paige said. The team has to be ready to respond to calls at a moment’s notice, so people often let you skip to the front of the checkout line.

“We will go to bulk stores to buy pantry staples like pancake mix, flour, oatmeal, olive oil and spices, but I found you can save more money combing the weekly grocery store circulars to figure out what’s on sale. Eggs are cheaper by the dozen at H-E-B than at Sam’s or Costco. Sometimes you can get steak almost cheaper than hamburgers. Ground beef is more than $3 per pound, but then you have to buy buns and all the tomatoes and all the fixings. Steak can be as little as $3.97 per pound when it’s on special,” Paige said.

Paige plans budget-conscious meals so he can use the savings to splurge on special meals. Leftovers? No problem. Paige said nothing goes to waste. “If we don’t eat it during our tour, the guys will take leftovers home or I’ll take it to my side job and eat it there,” he said.

“I can make something like chicken enchiladas inexpensively, and if there is any money left over, I’ll save it to buy something like prime rib. That rarely happens, but we probably eat better than most stations. Nobody is going hungry for sure,” Paige said.

Traditional firehouse fare can usually be described succinctly: “Brown, hot and a lot,” Gordon said, but Paige has a varied repertoire of recipes.

“You’ll typically find chili, stews and spaghetti, but I like to experiment with different recipes and ingredients,” Paige said. “Spaghetti is practically forbidden at Station 8 because Chief Gordon hates it. Over his career as a firefighter, he’s had more than his share of firehouse spaghetti.”

“I try to make healthy food, offer healthy sides or at least a salad. I generally stay away from frying, unless it’s a Thanksgiving turkey,” he said. “The city has a partnership with University of Houston students who are training to be registered dieticians. They come out to the station, show us cooking tips, give us healthy recipes and go grocery shopping with us.”

When it comes to milestones, birthdays, promotions and celebrations, Station 8 flips the script.

“If you have something you want to celebrate, you make the meal or bring the cake,” Paige said. “That way, nobody feels slighted or forgotten.”

“Capt. Paige doesn’t cook just the same old fire station meals,” Gordon said. “He goes out of his way to try new things and introduce us to recipes like Oysters Rockefeller or steak with chimichurri sauce. My favorite is the prime rib. He hasn’t made anything I don’t like.”

Dusty Chichester, a Station 8 Engineer/operator stepped up as firehouse chef when Paige went on summer vacation.

“He’s a hard act to follow,” Chichester said. “The chief and the guys critiqued my cooking, and we were all glad when he came back. Captain Paige’s food is as good or better than what I can have at a restaurant, but he makes it at half the price.” 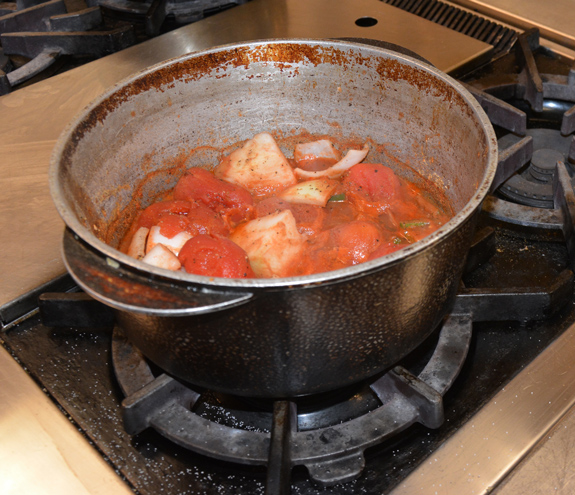 Combine all ingredients in a sauce pan.

Transfer to a blender and blend until you reach the desired consistency.

Most important kitchen tools – can opener and blender