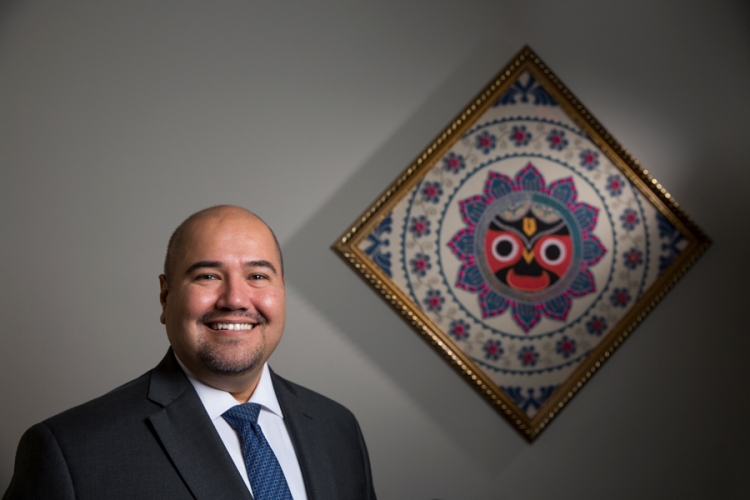 In a city where one in four residents was born outside the United States, keeping a finger on the pulse of our diverse population is a critical task for Mayor Sylvester Turner and the City of Houston.

With the immigration debate heating up in Washington, many Houstonians are looking to City Hall for reassurance that Houston is going to remain the welcoming city it has always been.

So, these days, Terence O’Neill is a busy man. As director of the Office of New Americans and Immigrant Communities, O’Neill is Mayor Turner’s go-to guy for gauging the sentiments and needs of Houston’s international community.

O’Neill is charged with leading the city’s official welcome wagon. It’s a job that requires deep ties to the community, introducing innovative programs and the ability to listen — really listen to residents.

The Office of New Americans and Immigrant Communities recently underwent a name change. Previously known as the Office of International Communities, it rebranded in December to focus on the mission of serving immigrant and refugee communities.

“We are a clearing house where we provide information and service referrals. For example, if a recently arrived refugee calls and needs assistance finding a job, housing, or access to ESL courses, we can point him or her in the right direction and give referrals for those services,” O’Neill said.

“We don’t provide funding, but instead serve as the arm, the eyes and ears into to the community,” he said. “When someone brings a concern to our attention, we share it with the mayor and we provide advice on policy recommendations that have previously made a positive impact on issues like language access programs, human trafficking and wage theft.”

Over the last six months, O’Neill has collaborated with a task force of business, community, cultural, faith and educational organizations to devise the Welcoming Houston strategic plan, a list of 50 recommendations presented to Mayor Turner.

Other welcoming initiatives include posting multi-lingual welcome signs in city buildings, airports and at the convention center as well as a resource website for new Americans to access language assistance, city and social services or report hate crimes.

In January, Mayor Turner joined mayors nationwide to declare his support for refugee and immigrant communities.

“Houston has always been and will continue to be a welcoming city. Our diversity is an asset and our strength. And as your Mayor, I represent every Houstonian,” Turner said on Jan. 29. “In this city we shall love, respect and appreciate everyone regardless of their differences and we shall do it peacefully. In this city, we don't build walls; we build relationships. We don't separate families; we value them. We don't hate; we love.”

Many in the community have expressed thanks for the mayor’s strong position.

“I’ve had several hundred emails and phone calls from people thanking the mayor for taking a stand,” O’Neill said. “It showed me that there is such a diversity of Houstonians who see the bigger picture. People just get it; people see that we are a city where you come work hard, pursue your dreams and contribute to the economic engine that is Houston. Let’s move on; let Houston be Houston.

“I’ve heard from folks who are fearful of all the recent anti-immigration rhetoric. But I’ve also talked to people who aren’t intimidated,” O’Neill said. “It says a lot about the immigrant communities and the challenges they have overcome, and it’s admirable to see that courage. We’ve seen activists and the community getting together for peaceful demonstrations, saying whether we are Muslim, Christian or Jewish, black, white, Asian or Hispanic, we are here supporting each other. And I think that’s what so great about Houston.”

Going forward, O’Neill said the Office of New Americans will continue to seek opportunities for community engagement. One initiative includes expanding the iSpeak Houston or language access program, translating portions of the city website into five languages, and launching a series of public service announcements on local television and radio that promote Houston as a welcoming and friendly city to all people.

On Feb.  25, the Office of New Americans and Immigrant Communities will host the Citizenship Forum to offer free citizenship application assistance with access to a free immigration attorney consultation. Future annual events include World Refugee Day festivities in June and National Citizenship month in November. They will continue to partner with cultural organizations to create art exhibits and performances that showcase the talents and educate Houstonians about the cultures of local immigrant and refugee communities.