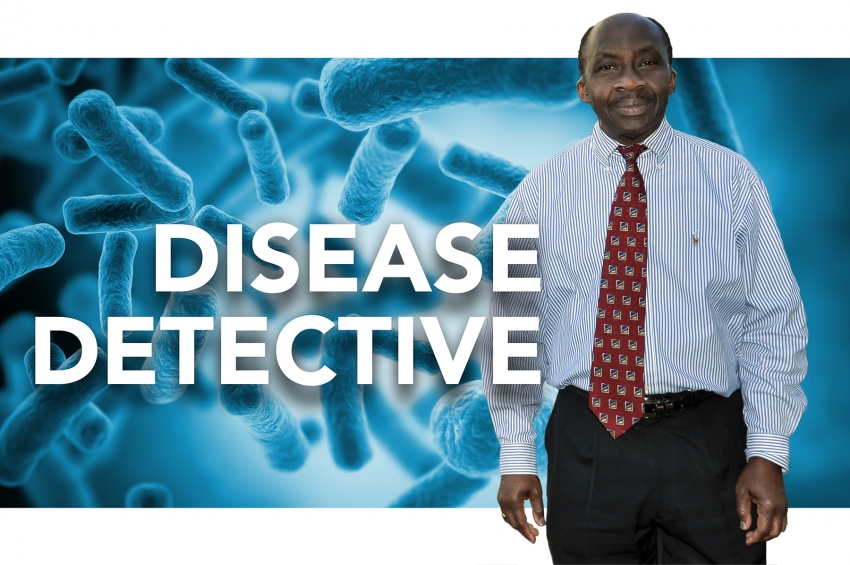 Spend a day on the job with Okey Akwari, a senior epidemiologist. Often compared to the “CSI of the Houston Health Department,” Akwari and his colleagues safeguard public health by tracking the source of potential outbreaks.

Most days are filled with routine office tasks, but at a moment’s notice, Okey Akwari could be called to find the cause of an outbreak.

As a senior epidemiologist for the Houston Health Department, Akwari seeks out the source of what most of us would rather avoid.

“Epidemiology always excited me because we are like disease detectives,” Akwari said. “It suits my personality. I’m inquisitive about things, and I like solving the mystery of how and where an illness started. On the science side, it’s a dynamic study of the determinants, occurrences, distribution, control and patterns of the illnesses.”

From assisted-living facilities and child care centers to airports, hospitals, schools and restaurant complaints, Akwari and his fellow epidemiologists safeguard public health by investigating and monitoring illnesses caused by everything from common bacteria and parasites to high profile viruses like Zika and Ebola.

Over the last 20 years, Akwari has filled various roles at the Health Department including working in childhood immunizations and then in the HIV and STD divisions, where he tracked newly diagnosed cases, delivered results, monitored health statuses, and guided patients to treatment resources as needed.

City Savvy spent a day on the job with Akwari on Feb. 16. The day started out, as he said most do, with phone calls, emails and catching up on paperwork. 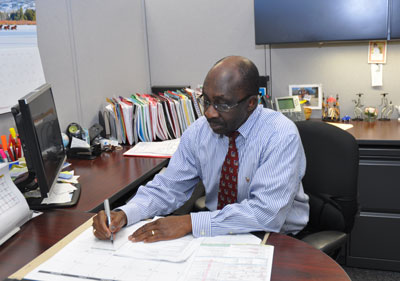 Throughout the morning, colleagues stopped by Akwari’s workspace to update him on developing cases, such as local elementary school with more than 20 confirmed cases of pertussis, or whooping cough. This highly contagious respiratory virus is preventable by vaccine but has been on the rise in recent years. Health authorities believe the spike in cases is partially due to vaccine failure and some parents’ failure to immunize their children.

Most of Akwari’s cases are food-borne illnesses, but the Zika virus has become a hot topic of inquiry and conversation, he said.

Reports from the National Center for Biotechnology Information suggest that the Zika virus was introduced to Brazil by a French Polynesian soccer fan visiting during the 2014 World Cup. Considering that the Houston Airport System estimates Houston received 9.8 million international visitors in 2014 alone, the threat of someone bringing the virus to Houston is real, Akwari said.

The city is being proactive about taking precautionary measures. The Houston Health Department is addressing different issues including:

The city is working across departments to develop a comprehensive prevention plan. The Solid Waste Management Department is currently cleaning up illegal dump sites and increasing collection of heavy trash to help reduce mosquito breeding sites.

“The important thing is not to incite fear. It’s critical that people don’t overreact. We already know that the Zika virus is a mosquito-borne illness in the same family as the West Nile and Japanese encephalitis viruses; whether it is a threat to health and how to best to intervene are logical questions,” Akwari said.

“Things change so quickly in epidemiology,” he said. “Just last month, the headlines were about food contamination at a national food retailer, and now we’re all talking about Zika. There is still so much we don’t know about the modes of transmission of this virus, but the Health Department is working with local and state authorities and the Centers for Disease Control and Prevention to stay ahead of any possible pandemic.”

Even without the threat of a mosquito-borne outbreak, Akwari and his colleagues have more than enough locally transmitted illnesses to keep them busy.

“I’m not big on seafood, but I’ll eat it if I have to. I’ve seen too much. I worked on an investigation where an immune-compromised individual had a minor wound on his leg. He ate raw oysters, which carry vibrio. It caused the wound to become further infected, and he had to have his leg amputated. My advice is to always wash your hands properly and thoroughly. Wash your fruits and vegetables, and watch expiration dates on most food items.”

He shared several outbreak stories from scenarios that could happen to anyone.

Once, contaminated food from a catered luncheon at a doctor’s office sickened 28 people, including nurses, doctors and staff with gastroenteritis. The problem was that not everyone ate all of the same food items. All the ingredients had to be considered and relative-risk calculations done. Akwari surmised that the food could have been contaminated by not being kept at the correct temperature during transportation.

“Most of the time, people can’t remember everything they ate, so food poisoning becomes a mystery to be solved,” Akwari said. “It starts with identifying what one ate, how and where it was prepared, whether any of the food handlers were ill; where the food was purchased, the brand and distributor, and the list goes on and on. If it’s local, we solve it. When it becomes a case of something that had nationwide distribution, the Food and Drug Administration is involved.”

Another time, an assisted-living facility had an outbreak of norovirus. Food was not to blame, Akwari said. Common areas and dining rooms were closed and visitors were prohibited, but the virus continued to spread.

Housekeeping staff changed shoe covers and mop heads and cleaned with chlorine-based solution for each room, but residents kept getting sick. The problem probably originated between two residents, a husband and wife who frequently played cards, passing the virus to each other (person to person) and to different parts of the facility with the deck of cards.

“You have to start thinking about control measures, what has worked in the past, how best to stop it from becoming a serious health issue or a nuisance in that community,” Akwari said. “Viruses are very serious among the medically fragile people in assisted living facilities. The answers are not always immediately apparent. Sometimes you have to go back and look at the investigation. You have to be focused, patient, open-minded, and you can’t be quick to draw a conclusion or you just might miss something important.”

Most important of all, Akwari said, is teamwork. Epidemiologists often work alone but can always default to the team for insight on the investigation.

They also work in tandem with the department lab, which gives epidemiologists a roadmap to conduct their investigations.

“We initiate our investigations as soon as possible, and the lab reports confirm the cases. There are thousands of serotypes of salmonella alone, and the lab tells us whether we have a match so we can determine if there is an outbreak from a single source. So, we are always so grateful for our partners in the lab,” Akwari said.