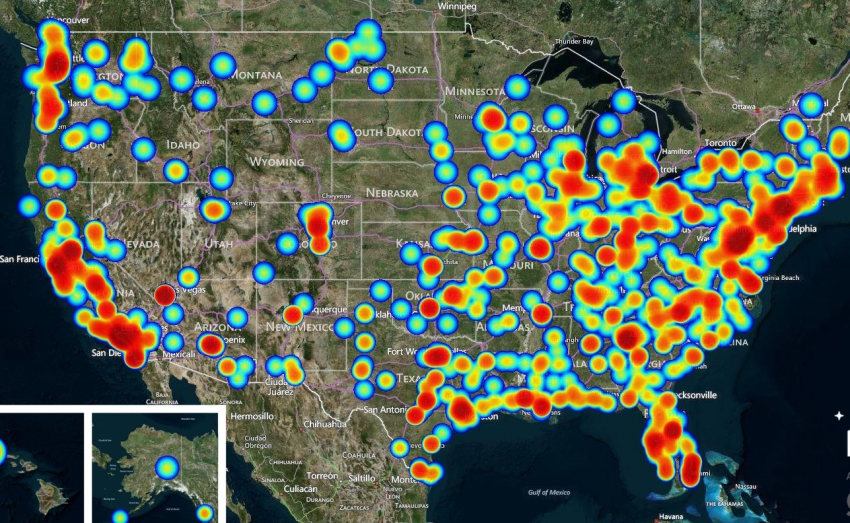 Human Trafficking is a $150 billion industry worldwide. The map above shows cases of human trafficking reported in every state in the nation. Map courtesy of the Polaris Project polarisproject.org

Houston has earned a reputation as a hub for human trafficking, but the City of Houston is doing something about it. Meet the latest weapon in the city’s arsenal against human trafficking - Minal Patel Davis.

In television and films, human trafficking victims are frequently portrayed as foreign-born women and girls who are kidnapped, smuggled over international borders and sold into prostitution. In reality, that’s not even the half of it.

Brooke Axtell paints a different picture. Growing up in Dallas, Axtell was sexually abused by her male nanny and forced to have sex with men for money while her mother was in the hospital. She was 7 years old.

Axtell’s story shows that human trafficking covers a broad spectrum of victims and complex criminal enterprises. It can happen to anyone. Often referred to as modern slavery, human trafficking victimizes men and women, boys and girls of all ages and ethnicities from the countries spanning the globe and the United States.

And it’s happening here in our community, but the City of Houston is doing something about it. City leaders are working diligently to reverse Houston’s notoriety as a hub for human trafficking into a reputation as a center for solutions.

Axtell told her story at a city-sponsored symposium intended to raise the level of awareness, dialogue and collaboration about human trafficking in Houston.

“I love seeing Houston on Top 10 lists,” said Mayor Annise Parker. “Most of those Top 10 lists are positive such as the best place for young professionals, the best place to start a career or the best economy. I don’t want to see Houston ever again on the Top 10 list for human trafficking in the United States,” Parker said at the symposium.

Parker has made human trafficking a priority during her administration by creating a task force three years ago, and establishing a special Houston Police Department Human Trafficking Unit devoted to investigating human trafficking cases two years ago.

Davis still manages the HAC-HT, comprised of 40 member organizations, in addition to now being the city’s point person to establish a continuum of care for victims, make policy recommendations, bridge the city’s efforts with local and federal law enforcement, increase public awareness and engage thought leaders.

City Savvy caught up with Davis on a morning in November. After being on the job for a little more than four months, Davis is already on the fast track to accelerate conversations into action.

“Human trafficking is an issue that requires coordination of a lot of moving pieces and the collaboration of multiple service providers,” Davis said. “Law enforcement is involved in apprehension of perpetrators and customers. The legal community is involved in prosecuting the perpetrators and helping victims navigate a variety of legal needs. They also need a wide array of health services for physical trauma, substance abuse, sexually transmitted disease screenings and therapy for issues similar to PTSD. Service providers help coordinate this and also assist many victims access to education services such as ESL and GED classes. Service providers also tirelessly work to find housing for adult victims, and many young victims need to be placed in emergency shelters designed for youth, placed in foster care and in some instances reunited with their family. Taking a systemized approach supported by the right technology will make everyone’s job a little easier. ”

And Davis is charged with fitting all of those puzzle pieces together.  Her first order of business was to organize the human trafficking symposium called Up the Ante: The Past, Present, and Future of Human Trafficking on October 29.

The symposium convened an audience of local and state elected officials, law enforcement, advocates, service providers and concerned citizens to hear a panel discussion from national human trafficking heavy hitters including Bradley Myles, the President and CEO of the Polaris Project, Dorchen Leidholt, Legal Director for Sanctuary for Families in New York City, and Siddharth Kara, Director of the Human Trafficking Center at Harvard University’s Kennedy School of Government. Brooke Axtell is now an Austin-based survivor advocate and Director of Communications and Engagement of Allies Against Slavery.

“Getting all of those people in the same room was really inspiring and productive,” Davis said. “Several promising projects came out of discussions with City Directors who attended the symposium. For instance, I plan to work with the Health and Human Services Department to distribute trafficking resource cards that will also be jointly distributed by several law enforcement agencies. We need the community to be our eyes and ears.”

Rushing between meetings with key players and community speaking engagements, Davis met with representatives from the United Way’s 211 hotline to discuss training opportunities and create an updated directory of local organizations and individuals working against human trafficking. She also met with representatives for Council Member Michael Kubosh’s office and HPD Captain Harlan Harris to discuss revisions to a local ordinance.

“Everybody wants to look at law enforcement to fix it,” said Harris, Captain of the Vice Division which houses the Human Trafficking Unit. “We can increase prostitution arrests and push both the prostitutes and purchasers through the criminal justice system, but that’s reactive. I’m more interested in outcome, not output. I want more success stories, not just numbers. Working together with Minal will help us work more strategically to get to the root of the problem and help the victims get off the streets and put perpetrators away for good.”

Davis is just getting started, but she has to reach a delicate balance of raising public awareness without revealing too much about the city’s plans to crack down on trafficking. She says she is focused on the mission and tasks at hand, and is not distracted by the uncertainty of a new mayoral administration. At the symposium, Parker spoke to the pressing need to further the city’s human trafficking efforts.

More in this category: « From HEC to high water, Walter keeps the information flowing Disease Detectives: Epidemiologists investigate illnesses from AIDS to Zika »
back to top