Trying to keep pace with the building boom 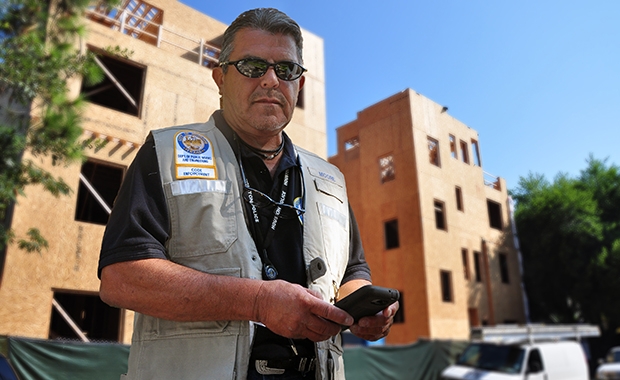 Robert Moore sees Houston's building boom first hand. Moore and his fellow city of Houston building inspectors hustle to conduct dozens of inspections daily. But with the number of projects increasing rapidly, the Permitting Center is looking to add new plans examiners and building inspectors to keep up with the pace of construction. David Smith

Construction in Houston is off the charts. The city is among the most active places in the country for building projects — commercial, residential, new construction, renovations, remodels, you name it.

But every significant construction project requires a city official to ensure it’s up to code. This presents an urgent issue for the city: bring in additional qualified plans examiners and building inspectors to meet the increased pace of construction or fall behind the demand and cope with contractors angered by delays.

Perhaps it was industry humor or maybe just an unintended pun when Permitting Center Executive Director Mark McAvoy said, “It's incredible, our demand is going through the roof.”

“Each month we've seen seemingly a historic high in construction plans, which is good for Houston, but it stresses our ability to keep up,” McAvoy said.

Indeed, the Center is reviewing 43 percent more plans since 2011, he said, while permits issued are up 11 percent over the same time.

A recent job fair looks like it will net about 15 new hires. The pay for both positions is just over $50,000.

“I would call it mildly successful,” McAvoy said, “but we still need to hire more people.”

Building inspector Robert Moore said he couldn’t agree more. He’s out in the field daily and hasn’t seen anything like it in his 11 years with the city. Inspectors hustle to visit as many sites as possible, he said, but the boom in construction is too much for the current personnel.

“The people we have are excellent, quality inspectors,” Moore said. “The amount of construction is overwhelming. We’re in such a need for inspectors in every department.”

McAvoy said building inspectors usually conduct 20 to 25 inspections a day. Some of the inspections may take place on a single job site, however. Still, it makes for a full day and the workload can exceed that busy pace. Moore said one day he had 36 scheduled inspections, while training a new inspector.

So another job fair is scheduled for the week after Labor Day on Tuesday, Sept. 2, and Saturday, Sept. 6 at the Houston Permitting Center at 1002 Washington Ave.

The Permitting Center promotes the job fairs on its webpage and City of Houston website. It also posts notifications on the City of Houston Twitter feed and distributes fliers. McAvoy said the Permitting Center also has taken out a full-page ad in EmploymentGuide.com and advertised on other construction industry websites. Plus, word of the events is disseminated through other sources such as Workforce Solutions offices, Houston Community College and local radio spots.

Plans examiners are involved on the front end of construction ventures. They review project plans to ensure they adhere to city codes and building standards.

Building inspectors are involved throughout construction. They inspect the progress of the construction project to ensure it is following the plans submitted and meeting building standards.

“Developers submit their building project designs to the city,” McAvoy explained. “The plans examiners review the submissions and work to make sure they meet the city’s code requirements. Then it is back in the developer’s court. When the building project is under way, there is an inspection schedule.”

Plans for a project must be submitted when a developer wants to obtain permits, according to McAvoy. Plan submission is one of the initial steps in that process. Meanwhile, building inspections occur at various points of the construction process. Major projects require multiple inspections, whereas simple projects may only require a final inspection.

Applicants for the positions must have at least a high school diploma and in most cases have some journey-level experience in at least one of the main construction categories: mechanical, electrical, plumbing or structural (framing and foundations).

“Anyone who finished high school and who has some apprenticeship experience should be qualified,” McAvoy said.

Plans inspectors may substitute some education for experience. For example, someone who has an engineering technology degree or architecture education can substitute that for the full complement of experience, he said.

McAvoy stressed that pursuing these new hires is vital to the city's performance of an important part of a very busy construction landscape. A full complement of building inspectors and plans examiners is essential to enforcement of the city's construction code, ensuring that construction meets standards of the uniform code.

“It protects people buying and using the structures built,” he said. “It protect the builders, too, and even affects regional insurance rates.”