Strictly speaking, vegetarians are people who don’t eat meat, poultry, or seafood. But people with many different dietary patterns call themselves vegetarians, including the following:

Vegans (total vegetarians): Do not eat meat, poultry, fish or any products derived from animals, including eggs, dairy products and gelatin.

Lacto-ovo vegetarians: Do not eat meat, poultry or fish, but do eat eggs and dairy products.

Veggies to the Rescue 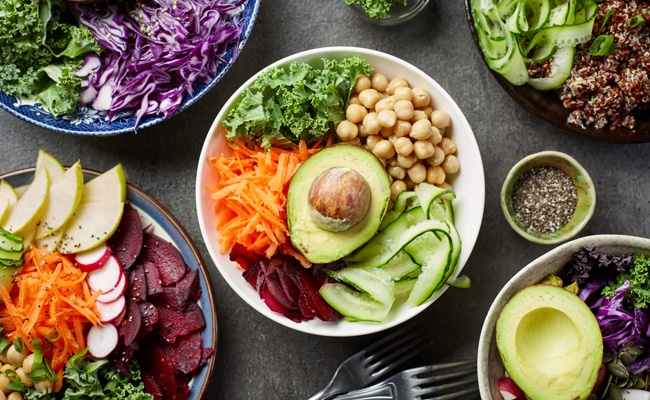 People are finding that a diet with more vegetables and less meat can have dramatic health benefits.

Where’s the beef? Or pork or chicken, for that matter?

Rocha, a project manager for Houston Public Works’ transportation and drainage operations division at 5500 McCarty, has joined the growing millions of Americans who have deleted meat from their diets.

People’s reasons for going meatless vary — health and diet issues, considerations about the ethical treatment of animals, concerns about large-scale commercial meat production and the environment, or just personal preference.

For Rocha, it is not really an exaggeration to say it seemed like it might be a life-or-death decision. She noticed that her cholesterol levels had been creeping higher in recent years but had remained on the high side of normal — until a few months ago when things changed.

“When I went for my wellness exam in August, it came back high and it was actually a lot higher than it had been,” she said.

ALL IN ON THE NEW DIET

One option was medication. But Rocha also knew that her family’s medical history included troubling high cholesterol and early deaths. She turned to her grandfather, who knew of several family members from current and previous generations who struggled with this health issue and described some who had ominous heart issues. A couple relatives had even died in their 30s.

“That’s what’s kind of scary to me: I didn’t know that many of my family had died of heart problems in their 30s. I’m in my 30s. So it was kind of scary and that’s why I decided to go vegetarian,” Rocha said.

She also determined that a small, incremental step in the right direction was not the way to go: she needed a major change and diet would be the key.

“I decided I was going to make this drastic change and see what happens. When I got that high result back, I called and talked to my grandpa because he and his wife are vegan, so it’s not completely foreign to me,” she said.

“I have had my numbers rechecked. I had them rechecked in the middle of November,” Rocha said. “They were back down in the normal range.”

SEEING FOOD IN A NEW LIGHT

Though Dr. Jonathan Aliota was not familiar with Rocha or her specific case, he has seen it all before. Aliota is an interventional cardiologist with Kelsey Seybold. He has studied and practiced medicine from Wisconsin, America’s dairyland, to the Gulf South, where people’s diets have produced major problems with obesity.

Aliota’s take on food is that people could stand to think differently about it and should develop diets that are more conducive to fitness than fun.

“Food should be mainly a fuel source for the human body,” he said. “But as human beings, we have turned it into a very important cultural aspect of our lives. We have parties to celebrate. We do these big family dinners, right. I grew up in an Italian family where if you don’t eat enough of the food your momma cooks, you don’t love her enough. I trained (medical training) in Louisiana where food is life, food is family, food is get-togethers."

“When you meddle with someone’s diet, you could be meddling with the very fabric of who they are and where they come from. That kind of change goes way beyond something like taking a new medicine. That is why I think some people struggle so much in changing their diet,” Aliota said.

But many Americans have cholesterol-related health issues, and an increasing number of studies point to meat as one of the reasons why.

“It was looking at red meat vs. white meat, and it said that maybe it’s not that red meat is so bad but that maybe all meat is bad. Maybe the real clinical significance it that chicken is just as bad for you as red meat. ... The bottom line was that the no-meat diets actually did beat meat-containing diets in terms of risk-reduction of heart attack, in terms of improving blood sugar control, and improving cholesterol control."

“I think that it’s a struggle for a lot of people to switch to a vegetarian or vegan diet. And I think that some people just cut the dairy out of their diet as well. We have seen a lot of improvement in cholesterol levels in people who have cut out eating dairy.”

Aliota said everyone is truly unique in terms of how diet affects them. People should consult their doctor about dietary considerations — especially with the increasing number of diet fads, some of which might create more health problems than they solve.

“Different people will respond differently to a change in diet. It isn’t as simple as everyone needs to become vegan,” Aliota said, “because I have seen in my own practice patients who stop eating meat have an incredible response with their cholesterol level — and by that I mean the LDL low-density lipoprotein (so-called bad cholesterol) — and see huge, huge drops in LDL levels. And then other people have tried it and haven’t seen such a profound difference. So I do think there’s a certain genetic component. It think it can depend on what your other risk factors are, as well as what your genetics are for your cholesterol. But it will have some benefit.”

But vegetarian diets can find the sweet spot, eliminating bad fat content while including numerous protein sources. And the best ones feature fresh vegetables and fruits, not chips and sodas.

Rocha said she had consulted her doctor, who was supportive. As she initiated the new vegetarian diet, Rocha said she stuck closer to food she already liked and built around that dietary foundation.

“Another thing is not to beat yourself up,” she said, suggesting that an occasional taste of meat doesn’t make you a vegetarian or vegan failure. “I’ve had a couple times when I’ve broken down and had a couple bites of meat, you know. I think it’s important to not make that another point of stress in an already stressful, busy life. It’s OK to fail once in a while.

“But I’ve also actually found myself craving it less and less. As time goes by, it’s only been a few months, but I find myself not affected by the smells of meat.”

Rocha said seeing tangible progress in her health convinces her that the no-meat diet is paying off.

“I think there’s a lot of benefits to it for lots of different reasons. But I was afraid I was going to die. That’s a pretty good motivator." 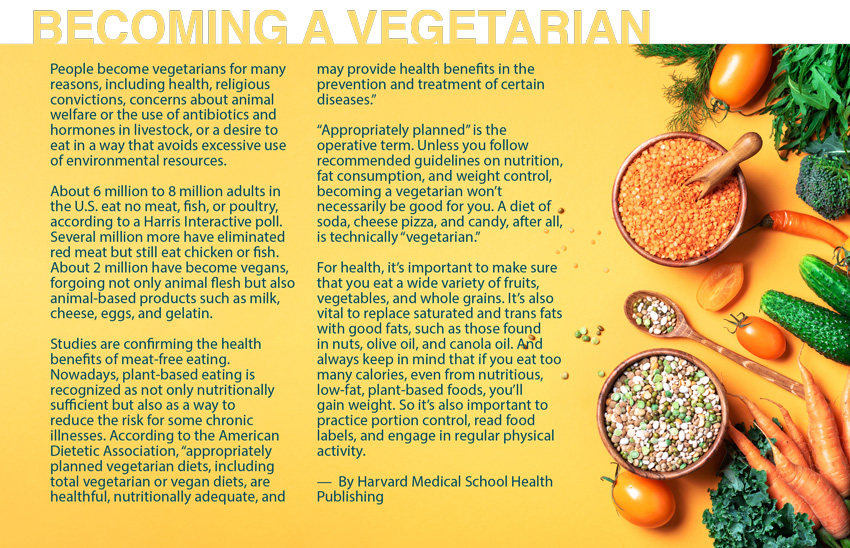