You’re never too old for vaccines 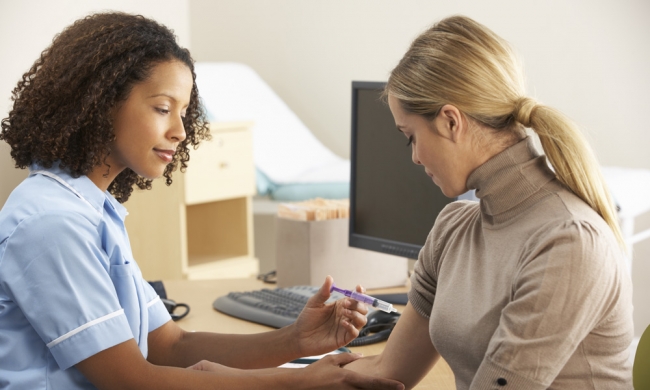 Kids and vaccines go together, almost like peanut butter and jelly or mac and cheese. As soon as they are born, they face a schedule of vaccines to guard against once widespread and potentially serious afflictions like polio and measles.

But vaccines are not just for kids. Health experts say adults need a variety of vaccinations too, for health issues that people become more susceptible to as they age. It’s just that no one is there to drag adults to the doctor’s office for shots.

Still, medical professionals urge adults to stay on schedule with several vaccines that should be part of their preventive care.

Antoinette Brisco is one of the more enthusiastic advocates you’ll find. Brisco is a licensed vocational nurse with the City of Houston Health Department working at the Sunnyside Health Center.

Having seen some of the afflictions that can attack adult patients, she is a big fan of adult vaccines that can help avoid serious health issues, or at least mitigate the severity.

Take shingles, for example. It produces a painful rash that can last up to a month or longer, and the risk of getting shingles increases as you age.

A new shingles vaccine was approved for use for those ages 50 and up. The previous vaccine had been recommended for people 60 and older.

“I was ecstatic when the shingles vaccine was offered at 50 years of age,” Brisco said. “I immediately contacted Kelsey-Seybold Clinic to make an appointment.”

The new shingles vaccine is a two-part process: two shots about six months apart. Brisco said the shots can be slightly painful, but shingles is much worse.

“The idea of waiting until 60 years of age was daunting because of the painful rashes and blisters associated with the virus. I preferred the vaccine to the disease and have now completed the process of shingles prevention,” she said. 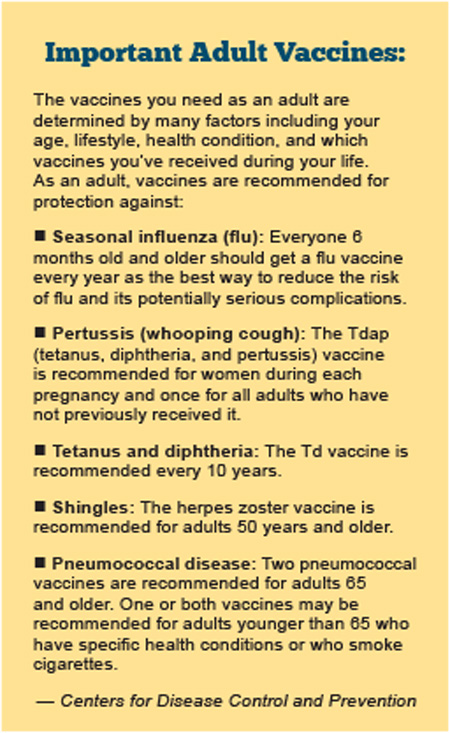 Health professionals believe the importance of stressing adult vaccinations goes up as the average of the U.S. population rises. And America is getting older. According to the Pew Research Center, an average of about 10,000 people turn 65 every day. By 2030, one in five people in the U.S. will be 65 or older.

Dr. Christine Le is right there with Brisco. In fact, Le, a doctor of osteopathic medicine and family medicine expert with Kelsey-Seybold’s Tanglewood Clinic on Augusta Drive, gets downright zealous about proper vaccinations — so much so that she and her medical assistant have held the Tanglewood Clinic’s trophy for vaccine evangelism for 12 years running.

“It has not budged,” she said. “I talk about vaccines all day long.

“At Kelsey, we are pro-vaccine. We understand the value of talking with patients about getting the correct vaccines for their age,” Le said. “Vaccines for adults are just as important as vaccines for children. I think sometimes adults forget that. They think what they got as kids is all they need.”

But no, there is no lifetime warranty for vaccines, Le said. She emphasized the Tdap vaccine for adults. It protects against tetanus, diphtheria and pertussis, or whooping cough, each of which can pose very serious health problems.

Also, the Tdap vaccine is given to pregnant women to protect newborn babies against whooping cough, Le said.

“Tdap works for 10 years. The last time kids get it is at 11 to 12 years old, so most adults need it by the time they’re 21 to 22. And then they have to be offered that again every 10 years,” Le said. “I think that is the most important one that adults sometimes forget.”

And Le said whooping cough has become more common in Houston as it becomes more of an international hub.

Like Brisco, Le said the recent advance with the shingles vaccine was a significant improvement since it allows people to take it 10 years before the recommended age for the old vaccine. The new vaccine is available to anyone 50 and older.

“Shingles is a bummer,” she added. “Shingles basically is when chicken pox wakes up, usually in adults. It has a higher rate of popping up when a person is above 60. If it does pop up, it can stay for six months. It attacks the body with blisters. And when the blisters go away, people can still hurt from that.”

Le noted that measles and mumps have been in the news lately because of a spike in cases across the nation. Adults can take the three-in-one MMR vaccine. It is for measles, mumps and rubella. Although all three are more commonly associated with childhood disease, they can be more severe for adults.

Most American adults have either had the measles or been vaccinated against it. Those who haven’t are still at risk for this highly infectious virus. Even worse, vulnerable adults may be at risk of serious complications such as pneumonia and encephalitis.

Le said another vaccine that’s important for some people is the pneumococcal vaccine.

“They call it the pneumonia vaccine,” she said. “It’s for people ages 65 and up. It’s great because it prevents a bacteria called Streptococcus pneumoniae bacteria. That’s the most common condition that can cause adults to go into the hospital with a lung infection. So it’s very important for some people.”

Among those who are prime candidates for the pneumococcal vaccine are heart patients, those with diabetes, lung patients — smokers and those with asthma — and liver patients.

“As a family doctor, I’m more of an adult pediatrician,” Le said. “I sort of find myself being like a mechanic: I need to let the patients know, this is what you’re due for. Most of the time they have no clue. But most people, when you tell them what they’re due for, then they’ll get it done right there.”