Studying health after Harvey can help in future floods

Harvey’s flooding was unprecedented. We’re still learning from it by looking back at it.

Health issues and illnesses in the wake of the unprecedented flooding came in all forms — some physical, such as bacterial infections from exposure to polluted water or respiratory problems from breathing mold spores, and others psychological, such as some form of PTSD or depression.

CitizensNet, the City of Houston eNewsletter produced by the Mayor’s Office, is joining Rice University’s Harvey Registry to compile as much information as possible about health issues after major flooding. If you experienced lingering health effects after Harvey and would like to contribute to a greater understanding of flood-related health issues, who is impacted and how to plan for the future, you may participate in the Hurricane Harvey Registry’s survey.

The brief online survey lists questions about the storm's impact on your physical and mental health.

You may take the survey at harveyregistry.rice.edu.

Harvey caused a flood of health problems. Even now, some residents still feel the effects.

Last year's disaster contained many health risks. Not all of them vanished when the water receded.

A little more than a year ago, the rain rolled in and oscillated between steady downpour and bands of intense driving sheets. For the better part of four days, of the unrelenting deluge left Houston swimming. Finally, the rain tapered off, then ceased, and the clouds broke.

That was Wednesday, Aug. 30, 2017. And just now, finally, Madilyn Moore feels like she’s beginning to see some light in her storm story.

Moore is a supervisor for Houston Public Works at the city’s Almeda Sims Wastewater Treatment Plant south of town, but she was at home when Harvey swept in and swamped her Kashmere Gardens neighborhood. The contaminated water rose up to her car windows. She waded to safety at an aunt’s house nearby. She had no viable option; staying in her home was out of the question. 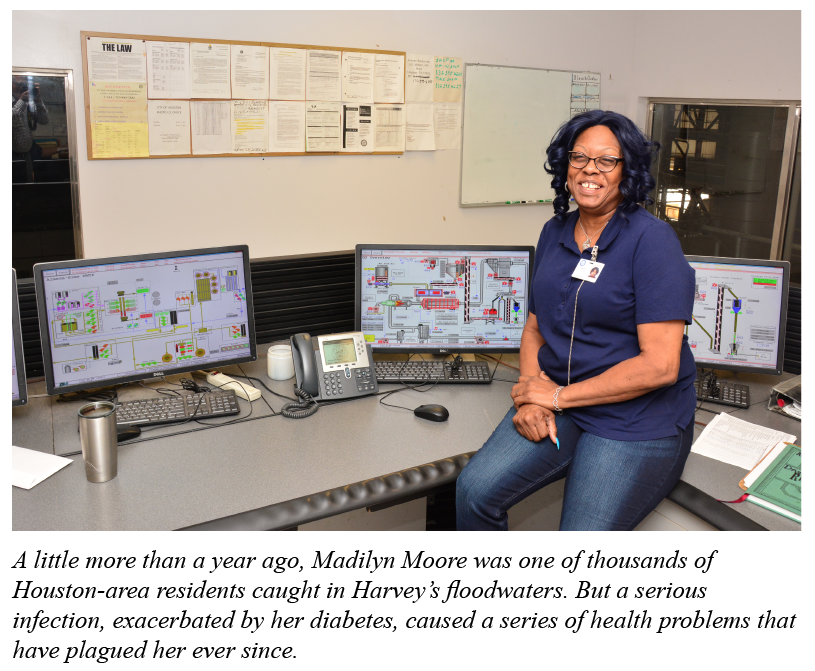 Moore has diabetes, though. That made her vulnerable to the bacteria she waded through. It wasn’t long before she felt ill and found herself on a long winding health odyssey that included hives, a diabetic ulcer, a cut on a toe that led to an agonizing infection, kidney and heart problems, and the amputation of the wounded toe. Doctors told Moore she almost lost her right leg. She wondered if she might die.

A year later, Moore is not back to normal yet. Her house was ruined and she’s living in a different (not altogether satisfactory) house in a different neighborhood. Many of her most cherished possessions were lost. She had a quilt her great-grandmother sewed decades ago. She rubs her fingers together and she can almost feel it: vibrant soft fabrics, a link to a past generation. It’s gone. Same for her precious crystal stemware. Gone. And more, too much to mention.

She still hasn’t gotten used to the PICC line in her chest, either, a visible sign that she is not yet well. She doesn’t need outward visible signs; every day she feels the infection that almost killed her. It’s still inside her. So she hits it twice a day with potent antibiotic injections — administers it herself with a syringe, sometimes at home, other times closed up in her office at work.

But Moore has her mother and a sister here in town and other family to live for. And she loves her job. She’s always loved work — ever since her first job when she was 15 — and wants to be busy doing something. It could be her job with the city, or it could be one of her hobbies, like restoring a vintage car.

So she’s getting better and insists she will be fine. But it’s hard and it hurts. That’s the way it is, healing after Harvey.

Houston just paused for a sober observance of the first anniversary of Harvey, the worst flood in anyone’s memory, if not the city’s history. News media have reminded us that the nightmare isn’t over for thousands. They tell the stories of some of those who lost nearly everything, whose houses may look OK from the outside but inside you can see through nearly the whole downstairs floor because it’s still down to the studs. And they didn’t have flood insurance. Or someone is telling them they have to pay to raise their house, or there’s no financial assistance.

But one part of the saga doesn’t get as much attention: people are still sick from Harvey — Madilyn Moore for one.

Dr. Shane Magee, an internist with Kelsey-Seybold’s Tanglewood Clinic, says we shouldn’t be surprised. Given the extent of Harvey’s trauma — the contaminated water people waded through, loss of medications, pre-existing conditions and immune system deficiencies, mental stress and anguish — medical ailments run the gamut and can linger for months.

And in Moore’s case, with the presence of diabetes,  health problems.

“People with diabetes have a harder time fighting off infections and also have a harder time healing from wounds for a variety of reasons relating to their diabetes,” Magee said. “It’s poor blood flow. It’s poor innervation, weakened immune system. So once people with diabetes are exposed to dirty water full of bacteria, for instance, it’s easy for them to get an infection.

“While infections are generally short lived in healthy people,” he continued, “with diabetes, because they have a hard time healing and a hard time fighting off infections to begin with, even if we treat the initial infection with antibiotics, you still have an ulcer that has to heal. And while it’s healing, it’s at increased risk for infection. So this is unfortunately a familiar story.”

The chaos during and after a disaster like Harvey can also make it difficult for people to stay on top of medication for diabetes or other conditions. Magee said people with diabetes who are uprooted or can’t stick to their routine may miss medication and see their blood sugar levels rage out of control, exposing them to infections and all sorts of other complications.

“It can be quite hard to get it under control again,” Magee said, “particularly if people are still displaced not back in their homes. It makes chronic disease management very hard and all the complications therein.”

It’s even in the air

Most people exposed to Harvey’s floodwater were more fortunate than Moore. According to Magee, infections and illness caused by exposure to contaminated floodwater are usually much shorter-lived, lasting from days to just a few months, not the extended months or a year or more that Moore experienced.

Health risks from a major flood like Harvey come in many forms, though, not just floodwater. Magee said many health problems stem from mold and tainted air quality. This is even more common than health issues from exposure to floodwater. Untold thousands of Houstonians breathed mold spores, questionable air and sheetrock dust as they ripped out walls and flooring while restoring their houses, and many suffered the consequences.

“Mold, particularly for asthmatics, can affect the way you breathe when it gets in the house. Getting rid of the mold can be quite difficult. That’s one of the big things we see,” Magee said. “And we’re talking about people tearing out drywall to above the flood line to make sure you get all the mold out. After the water gets in there and the mold is warm, it’s a good time to grow. Then it becomes more difficult to get out of the house. That’s also one reason why it took some people longer to get back in their homes.”

Respiratory problems can range from trouble breathing to frequent sinus infections, a chronic runny nose, and more. Magee suggested seeing a pulmonologist or other specialist who can diagnose and treat these and other problems.

Navigating through murky floodwaters or working to restore a flooded house can also lead to cuts, scrapes and puncture wounds. That makes tetanus a significant risk. Magee said U.S. residents have a high vaccination rate, which lessens the incidence of serious tetanus infections. Still, he urged caution.

Avoiding physical illness and injury doesn’t mean you got away scot-free, either. Harvey’s floodwaters were deep, reached so far and wide, and caused so much damage and death that psychological scars cut across the metro area.

Rescues came from the sky and water. In at least one case, people held hands to form a life-saving human chain that stretched out to a stranded motorist. But no matter the circumstances, many of those who were trapped didn’t know when, or even if the rescue would arrive.

Other residents had less harrowing personal experiences, but returned home to find mud and mold and treasured possessions lost to the flood. And even they now feel that all-too-familiar nervous pulse inside when a rainstorm gathers intensity, or doesn’t subside when forecasts had predicted.

Loss of property and possessions and the resulting upheaval can cause depression and anxiety. And even though Houston has not yet seen another catastrophic flood, the July Fourth deluge that caused bayous to swell and streets and freeways to flood no doubt stirred uneasy memories and nervousness for many.

“Mental health is tricky,” Magee said. “For depression and anxiety, you can certainly see your primary care doctor. People with PTSD, though, they’re reliving the experience. That’s really best handled by a psychiatrist. That can be hard to treat.”

“The mental health issues are what we’re seeing mostly now in a wide variety of people,” he said. “We can help with medicines that offer some benefit. Counseling and therapy are also very, very beneficial. A lot of companies have EAP programs for a certain number of visits. And there are other resources in the community to look into.

“The mental health issues can be in some ways more devastating than the physical health issues because they can be longer lasting and be more nebulous problems. They are certainly a longstanding issue that don’t get better as quickly as a small G.I. (gastrointestinal) bug,” he said.

Magee also said people who have some mental and psychological conditions can be especially affected or distresses by a traumatic event like Harvey.

“People with bipolar disorder can certainly have uncontrolled disease after a flood. People with schizophrenia can be worse. So can people with cognitive impairments, people with dementia — sometimes that can send then on a detrimental path,” Magee said. “People with dementia, for instance, they are best handled in an environment that doesn’t change from day to day. And after a flood, your environment is constantly changing, or even displaced. So that’s a big issue; dementia patients can worsen.”

A year after Harvey, Houston’s remarkable recovery can give the appearance that things are nearly back to normal. But under the surface, many residents still struggle to repair their residences or relocate their home. Others are just now recovering physically and psychologically, or are still literally sick of Harvey.

Magee says people often prioritize fixing their property, and may, without thinking about it, push their physical and mental well-being to the background. But that is usually a mistake.

“A lot of times people at this stage are still trying to get their life back in order and are neglecting their health. I do understand that,” Magee said. “But your health can impact you many years from now if you don’t get it under control, so I would encourage people not to forget about their own health and take care of themselves.”

“I’m still fighting  with the diabetes. I have to fight every day and keep a positive attitude,” she said. “I have a 90-year-old mother and a 65-year-old sister to take care of. If I’m not well and able, there will be no one trustworthy to take care of them. I can get the material things again, which I’m struggling to do, but I will succeed.”