Sedentary behavior can cause a range of medical problems. Instead of putting your feet up, get moving with these five tips for power walking.

Set goals: Whether you’re a walking newbie or a veteran, it’s best to set goals for daily activity. Beginners can opt for 20 to 30 minutes of walking a day. You can break activity into 10-minute segments. Also, aim for at least four to six walks a week. Once you build your endurance, you can increase the time and intensity of your walks.

Track your steps: Activity trackers can capture your daily steps and help motivate you. You don’t have to break the bank when it comes to activity trackers. Even simple pedometers can keep track of your steps.

Wear the right shoes: Comfort plays a big role in your exercise. Make sure you wear lightweight and breathable shoes that fit well. Take note of flexibility, heel cushion, and overall fit.

Total steps taken by each participating department from January to August 2017.

(Number of participants in parentheses.) 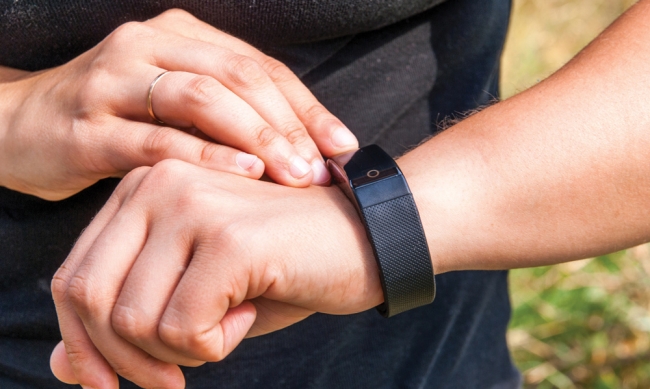 Yadira Gonzales has long struggled to get a good night’s rest. A chronic asthmatic for more than 30 years, she has difficulty breathing, suffers from asthma flare-ups at least twice a month, and experiences pauses in breathing while she sleeps due to a diagnosed sleep apnea disorder.

But an email about the City of Houston’s pilot Fitbit program would spark an inspiring health journey for Gonzales and give her the motivation she needed to make meaningful lifestyle changes.

“I saw it and I thought it would be a great opportunity to get involved.” said Gonzales, an airport supervisor for the city’s Houston Airport System. “I signed up, qualified, picked it up, and have loved it ever since.”

Launched by the city’s Wellness team in July 2016, the program offers city employees Fitbit activity trackers free of charge to use and participate in wellness challenges. Once participants receive their Fitbit, they can download the Fitbit app and sync their trackers to their smartphones. The Fitbit app allows users to set health goals and track exercise, calories, water intake and sleep.

Physical activity helps to improve health, reduce chronic conditions, and helps to manage overall health, according to the Centers for Disease Control and Prevention

City departments with high incidents of certain chronic conditions or medical claims cost were recruited for the program, said the Wellness team.

The city’s Fitbit Corporate Platform started in January 2017 and allows the Wellness team to track employees’ activity and motivate them through Fitbit challenges. Currently, more than 300 Fitbits across seven city deparmtenst are atthaced to the platform.

Fitbit distribution depends on participation, according to the Wellness team. When teams win challenges, they earn the opportunity to get more Fitbits and create more interdepartmental teams.

Gonzales said the increased physical activity was not easy but that family, friends and co-workers encouraged her.

“It was hard at first. Walking 3,500 steps a day was unbearable for me,” Gonzales said. Then I noticed my steps increased. I set my goal to be 5,500 steps per day.

Since June 2017, Gonzales has taken more than 1 million total lifetimes steps thanks to her participation in various internal and external Fitbit challenges. That’s almost 500 miles, or nearly the equivalent of walking from Houston to Little Rock, Ark.

City employees across participating departments have combined to take more than 200 million steps from January 2017 to August 2017. That amounts to more than 90,000 miles.

“If I could take a shortcut, I would,” Gonzales said. “Now, I tend to take the long route.”

Gonzales’ persistence has helped her reach some long-desired health milestones.

“In the last couple of months, I haven’t had to use my CPAP machine to sleep,” said Gonzales who has used a continuous positive airway pressure therapy device to treat her sleep apnea since January 2017. “And it’s been while since I’ve had an asthma flare-up.

Gonzales’ improvements in breathing and sleeping aren’t the only health benefits she’s experienced since joining the program.

So far, Gonzales has lost 15 pounds, reduced her waistline by four inches, increased her water intake from 16 ounces to 48 ounces a day, and has eliminated soda and Starbucks from her diet.

And that’s not all.

Each year city employees enrolled in a city health insurance plan who complete a biometrics screening, an online health assessment, and wellness activities, receive a discount on their health insurance premiums.

“It has helped me tremendously,” said Gonzales of her participation in the program.

The ultimate goal is for the participants to increase their physical activity, which will in turn hopefully improve their health and help them manage any chronic conditions they may have, says the Wellness team.

To learn more about the pilot Fitbit program, contact the Wellness Connection at wconnection@houstontx.gov.