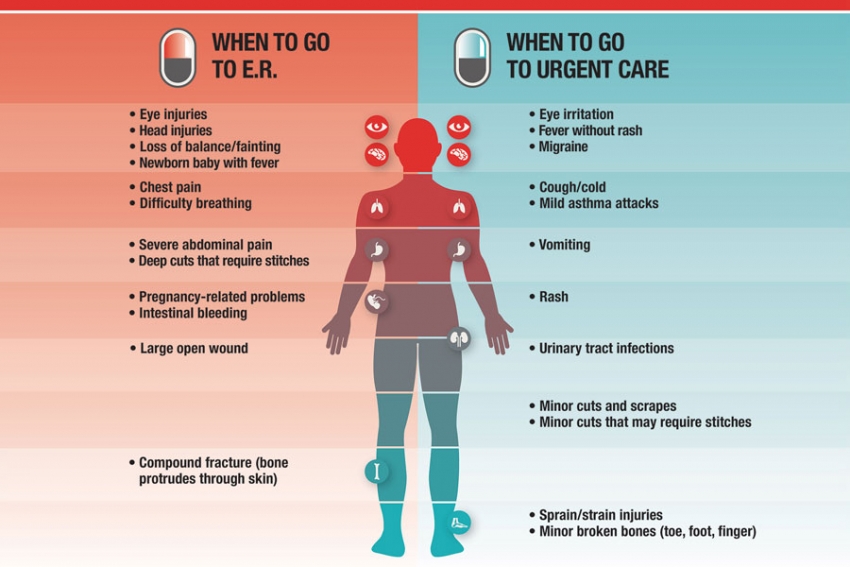 They sound similar, but wait until the bill comes

A sudden health issue can be alarming — and may be more expensive than it needs to be.

Blum, a Human Resources customer service representative, learned the hard way about the sometimes vexing dilemma of where to go for a sudden medical issue. She went to an emergency room only to learn later that her condition could’ve been treated at an urgent care clinic instead. And she paid for it in higher medical costs when the bills came in.

Emergency rooms and facilities are intended to treat traumatic phenomena that could result in loss of life or limb; whereas, urgent care facilities handle issues that need to be treated right away but are not an emergency. Another difference: an ER is much more expensive.

“One time back in 2009 I was getting ready for work. When I got out of the shower, I looked down and was bleeding from my lower leg,” she said. “One of the veins in my lower leg had burst and it wouldn’t stop. Blood was everywhere. I tried to stop it. A towel wouldn’t even work.”

Blum said she was inclined to go to her personal physician’s office. But, unable to stop the bleeding, she opted for Memorial Hermann Southwest Hospital just a few blocks away.

“I thought I’d just get dressed and run up to the hospital, thinking I’d let them help me get it stopped. I get up there and had to wait probably an hour and a half,” she said. “Finally, when someone came and took me to the examining room and wanted to give me a drip because they were concerned I was dehydrated or something.

“Then in the middle of all this, here comes the lady from accounting asking, ‘How are you going to pay for your visit today?’ I didn’t realize it was going to be so much.”

Experiences like this are why Cigna onsite Service Coordinator Maria Rodriguez says people need to know the difference between urgent and emergency care and make informed decisions when choosing where to go.

“Under the Urgent Care vs. emergency room benefits for the limited plan, if you go to an in-network urgent care center — and they’re everywhere in the United States — it’s subject to a $60 copay as opposed to a $300 copay,” Rodriguez said. “So you’re paying $240 more going through the emergency room. If it isn’t a true emergency, you can always go to to urgent care vs. the emergency room.”

Other plans have different levels of financial accountability. Rodriguez said the Open Access and Consumer Driven plans are subject to the policy deductible.

“With Open Access for urgent care, you have a $60 copay for urgent care vs. with the emergency room, where you have a $500 deductible that the customer has to meet, plus 30 percent,” she said. “Cigna will pay 70 percent and the customer will pay 30 percent of the charges, which include the hospital, the emergency room physician, radiologist, X-rays, labs, and the technicians that incur services while you’re in the ER.

“And under the Consumer Driven plan, everything is subject to a deductible of $1,500 individual in-network, $3,000 family, and it’s covered at 80 percent,” she said.

Some situations demand making that call, though. Rodriguez said one caller described having chest pains and was experiencing a locking jaw and an unusual sensation around the face. Rodriguez told the caller to go to the emergency room, not to a primary physician. The caller declined to contact 911, but Rodriguez strongly recommended a nearby ER. Later she learned that the caller had a stroke and was told by an ER doctor the stroke would’ve been more damaging had there been a lengthy delay going to the emergency room.

Rodriguez said sticker shock is not the only drawback to going to the emergency room for an urgent care issue.

“You’re going to lose time because they can see it’s not a true emergency, so they’ll make you wait behind other people who are coming in more ill. And then you’re going to pay more on top of it,” she said.

Rodriguez knows firsthand that children can complicate things, as can repeated visits. When a child is involved, people can be inclined to view a medical issue as an emergency.

“But go to urgent care if you can. The ER does add up,” she said.

“The charge is essentially non-negotiable,” she said. “If you go to the emergency room, that’s $300.”

Also, not all urgent care clinics qualify through Cigna plans. Customers should be aware of that, regardless of whether they are in a PPO or Limited Care Plan. Customers may appeal an out-of-network bill, “but basically if you went out of network, there are no benefits,” she said.

Rodriguez said customers should contact Cigna for clarification on the urgent care vs. emergency care issue to prevent high bills for unnecessary trips to emergency facilities. They can answer questions or help customers locate facilities.