is more than a passing nutritional craze

But nothing was conclusive, said Robinson, a senior communication specialist in the Human Resources Department. Every turn was a dead end.

At one point, the Robinsons feared that a sports concussion in high school could have created lasting neurological damage. 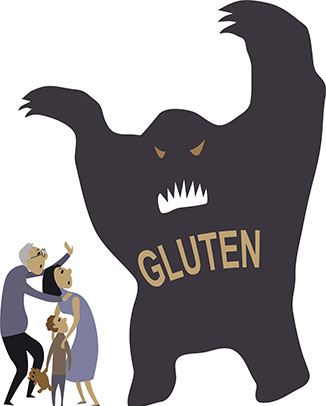 “It was frustrating and time-consuming to figure out what was wrong with him, and to choose the right doctor,” Robinson said. “I knew his health was debilitating, and I started hunting for answers everywhere.”

Garrett, 21, a student at the University of Texas in Austin, took a year off from school to get a handle on his health. He documented and experimented with his diet. Dairy foods caused prolonged discomfort, but he also started eliminating wheat and processed foods.

“It went on for as long as I can remember,” Garrett said. “Every time I ate, I would feel weighted down the entire day. I wouldn’t sleep well; my muscles felt stiff; and I was always having headaches, nausea and dizziness.”

After a series of blood tests and a colonoscopy and endoscopy, he was diagnosed with celiac disease, an H. pylori infection, and severe malnourishment, Garrett said.

“I was eating, but my body just wasn’t absorbing the nutrients from food, and I wasn’t sleeping, so that led to a lot of the other symptoms,” he said. “We thought it was emotional problems, but when you don’t get a good night’s rest, it only takes a few days before it takes a toll on you emotionally.”

The diagnosis was a relief for their family, Robinson said. But then began the journey to go gluten-free. Robinson and her husband R.J. have three other children.

“We started doing the research and found healthier alternatives that he can eat such as coconut flour, gluten-free flour, gar gum and chia seeds,” Robinson said. “Buying double for the household and cooking that way turned out to be a hassle or double the work, so we are all converting to a healthier lifestyle.”

A quick look at the grocery store shelves reveals the growing popularity of gluten-free products. Similar to the  low-fat and low-carb craze diets of the past, the gluten-free diet is often considered the next fad or marketing ploy.

Yet, everyone is jumping on the bandwagon. According to Mintel, a nationwide market research company, gluten-free products will make $15 billion in sales in 2016. Even the Girl Scouts have a gluten-free cookie.

But what is gluten? According to the Celiac Disease Foundation, gluten is a protein found in wheat, rye and barley. Most importantly, gluten is in everything that contains flour: beer, most processed foods, some candy, cosmetics, toothpaste and even Play-Doh, which is frequently ingested by very young children.

For most people, going gluten-free is a choice, but for people with celiac disease, avoiding gluten is a necessity.

Celiac disease is an autoimmune disorder in which people cannot tolerate gluten because it damages the inner lining of their small intestine and prevents it from absorbing nutrients, the celiac foundation stated. Only about 1 percent of Americans have celiac disease, but up to 18 million people have gluten sensitivity.

Celiac disease is not an allergy; it’s not a fad and it’s not just being picky, said Ronda Elsenbrook, a Kelsey-Seybold registered dietician.

“When the gluten-free diet was made popular a few years ago, people found that they lost weight when they eliminated these processed foods that contained gluten, breads and pasta,” Elsenbrook said. “It became more mainstream to go gluten-free for weight loss.”

Not everyone who is on a gluten-free diet has celiac disease, she said. They may have a slight intolerance, maybe they bloat and feel better avoiding these foods, Elsenbrook said.

“A lot of times, people will think celiac disease is not that big of a deal, and that celiac patients are just being difficult or part of the fad,” Elsenbrook said. “People with celiac disease don’t have a choice. It causes inflammation in their intestines, can lead to a lot of other serious diseases. It’s extremely important for them to be vigilant about what they eat.”

He has encountered his share of naysayers who don’t believe the extent of his dietary restrictions, Garrett said.

“I’m just that rare statistic,” he said. “I know what is going to hurt me is not going to please others because they don’t believe me or the science.”

If left untreated, celiac disease can lead to other autoimmune disorders like type 1 diabetes, multiple sclerosis, dermatitis herpetiformis (an itchy skin rash), anemia, osteoporosis, infertility, miscarriage, short stature, intestinal cancers and neurological conditions like epilepsy and migraines, according to the foundation. The only treatment is a strict adherence to a gluten-free diet.

A routine series of blood tests is used to diagnose celiac disease, but doctors and patients can easily be misled by symptoms that mirror other diseases, according to the CDF. An estimated 83 percent of Americans with the disease are undiagnosed or misdiagnosed with other conditions such as irritable bowel syndrome, anemia, lactose intolerance, diverticulitis, intestinal infections and chronic fatigue syndrome.

Months, if not years, of pain and emotional distress could have been eliminated, if he had been diagnosed sooner, Garrett said.

“Part of the problem is that our intestinal tract is our first line in our immune system,” Elsenbrook said. “It has a huge job in protecting our health. It has to deal with everything that comes into the body. It’s our main sources of breaking down nutrients. The host of symptoms that you can get when that first line defense system breaks down is quite variable.

“Sometimes it is hard to pinpoint what is going on, and people with celiac disease have to build up the antibodies for that test to come out positive,” she said. “Often something has been going on for a long period of time before it is diagnosed. If you have stopped eating gluten, you will not get a conclusive result,” she said.

One day at a time

Garrett said he has drastically changed what he eats. Some days are better than others, but he is grateful for the game plan to improve his health.

“My body was so damaged and malnourished, and we are slowly rebuilding the environment in my intestines,” he said. “Before my diagnosis, my go-to meal was a sandwich. I had to give that up until I found a good gluten-free bread, and I can have sandwiches again. I don’t eat out because even though items on a menu say they are gluten-free, you just never know if they were cross-contaminated.”

His typical meals include lean protein like chicken and salmon, vegetables and fruit such as spinach, broccoli, apples, bananas and anything high in protein and fiber, Garrett said.

“It’s tough because I need to eat a whole chicken every day to get enough protein,” Garrett said. “I have deficiencies in Vitamin B, K, A, E and folic acid, so I have to take those in supplement form, or I have no energy. I miss quick, cheap meals like ramen noodles, but I know there is more value in my health than what’s cheap and easy.”

Garrett is back at school, his intestinal infection is recovering, and he’s working on his gluten-free diet, Robinson said.

“He’s doing better, but it’s just hard for him to keep his energy level up and to pay for groceries,” she said. “He’s a big boy, so he has to eat about three to four well-balanced meals a day to sustain his hunger. We are all happy since we understand what is wrong with him, and he is excited to start living life again.”