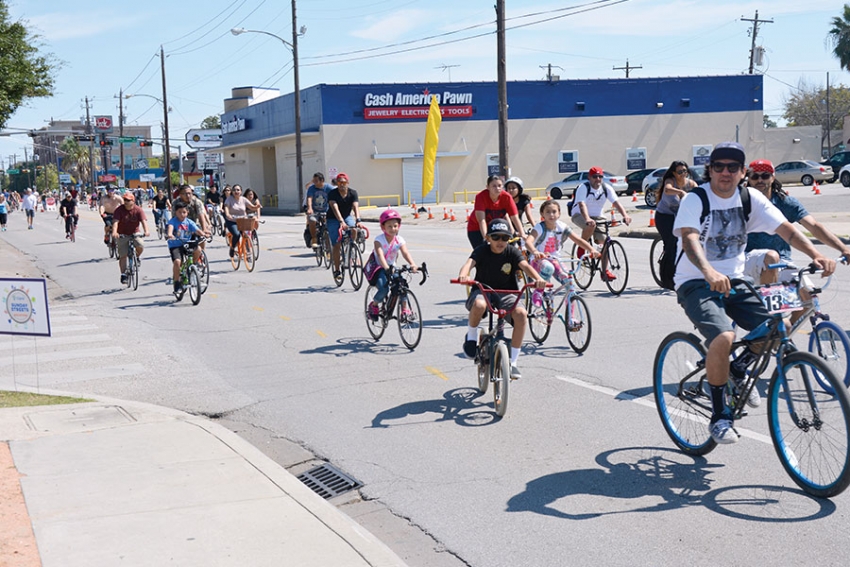 Cigna takes to the streets to improve Houstonians' health

For Houstonians, walking, biking, skating and even dancing in the streets are becoming more commonplace, thanks to the 2015 Cigna Sunday Streets Fall Season. The events promote healthy activities by closing a few blocks of a prominent city street to traffic and encouraging residents to get out and get moving, while connecting them to free activities and local businesses in their neighborhood.

One recent Sunday Streets event along the vibrant stretch of Washington Avenue between Westcott Street and Heights Boulevard drew thousands. In fact, organizers expect about 20,000 at each of this fall’s three events. The others are scheduled for Nov. 1 in the Museum District and Dec. 3 in Midtown.

“You see everybody out here on their bikes, they’re walking, they’re skateboarding, they’re running. So we hope that we will continue to be able to do this,” said Dr. Faith Foreman, assistant director of the city’s Health and Human Services Department, at the Oct. 3 event on Washington Avenue.

Aligned with the mayor’s Go Healthy Houston initiative, Sunday Streets converts a main thoroughfare into a traffic-free pedestrian mall for a few hours.

“Cigna Sunday Streets is a family-friendly opportunity for residents to get outside and enjoy physical activity, socialize with neighbors and enjoy art perForemances in their community,” said Mayor Annise Parker. “We are thrilled to bring this event to more neighborhoods this fall, and thanks to Cigna, we will continue this tradition for many, many more seasons to come.”

The concept of a free one-day event designed around healthy activities encourages a new era of healthy living to replace the lack of physical activity that can be prevalent in a car-centric city like Houston.

“We were really targeting to get Houstonians out and to move more,” Foreman said. “That’s what Sunday Streets is about.”

And that approach could help a lot of people in Texas, where more than 60 percent of adults are overweight or obese, according to the State of Health in Houston/Harris County 2015-16 special report. In 2013, more than 17 percent of children aged 12 to 19 years were considered obese, the report said.

“By working together with the City of Houston to bring Sunday Streets to the community, we are giving people a safe haven to participate in activities that improve their health — including biking, walking, running or socializing with family and friends,” said Mike Koehler, Cigna’s president and general manager for South Texas.

Launched last year, Sunday Streets is modeled after similar community health events that take place in San Francisco, Dallas, and Los Angeles and other U.S. cities, as well as other major cities around the world.

“We just don’t think of Houston being a walkable or bikeable city. We need to bike. We need to move. We need to exercise. And Sunday Streets gives us an opportunity to do that,” Parker said.